“Energy transition” is not a new concept to the energy industry. One of the key trends of the United States’ power system during the past twenty years has been the substitution of coal to gas-fired generation. This trend can largely be attributed to the abundance of low-cost natural gas extracted from shale and tight gas resources throughout North America. In 2001, coal generation accounted for 51% of net generation in the United States, while natural gas generation accounted for 17%. In 2019, coal’s share more than halved to account for 23.4%, while natural gas’s contribution more than doubled, rising to 38.4%. In 2019, the electric sector consumed 11.3 trillion cubic feet (Tcf) of natural gas, nearly 40% of total end use, consuming more than any other sector. This interdependency with natural gas means it is critical that energy professionals simultaneously consider both markets to produce realistic, actionable intelligence. Likewise, the ongoing rapid deployment of wind and solar projects will further transform the power sector, impacting natural gas markets and market share in turn. 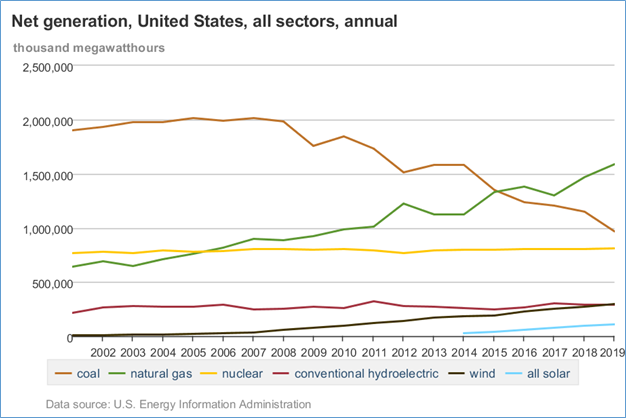 As the industry transitioned away from coal to gas, it became clearer the importance of having a better understanding of the new integrated gas and power markets. One could no longer have a siloed view of the power and gas sectors. The increasing interdependency led to the need for an integrated gas and power market simulation solution. In this case study, RBAC partnered with Energyzt Advisors in a project that integrated the GPCM® Natural Gas Market Forecasting System™ and Energy Exemplar’s PLEXOS power market model using RBAC’s Power Model Interface (GPCM-PMI™) to demonstrate how impactful the integration can be to the results compared to those obtained by running the two models independently.

Power models typically use a set of locational gas prices as model inputs and produce an estimate of gas consumption based on the power sector’s constrained economic dispatch (least expensive resources first then successively higher cost resources, accounting for infrastructure and grid requirements). In contrast, GPCM uses a potential range of price sensitive gas consumption from the power sector as an input and produces an estimate of prices based on the gas sector’s constrained economic dispatch. Mutually consistent results mean that the natural gas prices and gas consumption by the electric sector in GPCM produce an equivalent set of burns and prices in the power market model.

The convergence process unifies the different policy, infrastructure, supply and demand, and fuel price assumptions from both distinct models into a gas-power co-optimized model. The first step in the process is to map GPCM to the power market model. EIA’s plant ID can be used to define the geographic location of specific generators in the power market model to a corresponding location in GPCM.

Converging the two market models so that the results are mutually consistent requires an iterative approach. A change in the electric sector demand for gas in GPCM produces a new set of prices. Once loaded into PLEXOS, these prices produce a new electric dispatch and in turn change gas demand from the power sector. Convergence is achieved once an iteration produces minimal change to prices and gas burns from one iteration to the next. This study achieved convergence after five iterations under the “Energyzt” scenario. The iterative process can be automated using RBAC’s Power Model Interface, significantly reducing analyst time spent on the process.

The goal of the iterations is to merge the assumptions and output of two distinct models:

GPCM’s base case forecast uses the EIA’s Annual Energy Outlook (AEO) to estimate future potential gas consumption from the power sector. The AEO does not incorporate goals or targets into the forecast unless they are codified into state law. Using PLEXOS, Energyzt developed a power market scenario that includes the clean energy goals of New York, Massachusetts, Connecticut, Rhode Island, New Hampshire, and Maine. The Energyzt PLEXOS scenario incorporates more clean energy goals and demand response than the AEO forecast. The Energyzt scenario used in this analysis is a representation of the Eastern Interconnection of the United States, so all other gas market assumptions – including gas-fired generation located in ERCOT, the Western Interconnection and Canada – are based on RBAC’s 20Q2base scenario which is in turn informed by the AEO forecast for the United States and similar forecasts for Canada and Mexico published by government entities there.

The figure above shows the total U.S. electric sector gas demand in each iteration between the models as well as the 20Q2base forecast for the period 2020-2030. The gas-power iterations incrementally approach a converged solution, Energyzt_IT5, shown in black. The increases in generation between iteration one and five reflect electric generation response to lower natural gas prices, so a single iteration would significantly underestimate gas demand. The results demonstrate that aggressive environmental policy goals could have a major impact on natural gas consumption in the power sector. The Energyzt scenario averaged 5.2 Bcf/d less power burn than the 20Q2base scenario (a decrease of 17.3%), with a maximum deviation of 12.2 Bcf/d in March 2030 (a decrease of 47.1%). Such a large change in consumption has a dramatic impact on future gas prices given the importance of gas-fired generation to the overall gas market.

The above plot shows the GPCM Henry Hub price forecast in real 2019 dollars under each iteration from January 2020 through December 2030. 20Q2base reflects the gas prices under higher gas burn assumptions, while “Energyzt” reflects the initial gas burn projections under a scenario incorporating Northeastern states environmental policy goals. The iterations incrementally approach the converged solution “Energyzt_IT5”, with each iteration increasing gas-fired generation dispatch in response to lower prices until an equilibrium is reached.  Again, it is important to note the variance among the iterations and how simply running one iteration results in dramatically lower gas prices, which would incentivize additional gas demand and thus would overestimate the impact to gas prices.

The convergence of Energyzt’s scenario and GPCM’s 20Q2base scenario results in substantially lower gas demand and prices than the forward curve implies. The converged solution is on average $0.32/MMBtu lower than the NYMEX futures during the next decade and is approximately $0.75/MMBtu lower during winter peaks in the latter half of the 2020s. The price effect underscores the large impacts that environmental policies could have on natural gas markets in the coming decade, which may not be fully reflected by market sentiment. Further, this analysis only focuses on gas-fired generation in the Eastern Interconnect of the United States. A full accounting of the rest of the United States, Canada, and Mexico could result in even more marked impacts.

One additional effect of this potentially signification reduction in domestic natural gas demand could be greater LNG exports.  Global demand for natural gas is growing rapidly as a result of its affordability and environmental superiority versus coal in the production of electricity.  Countries throughout Asia are building LNG import facilities to take advantage of the economics and advantages of natural gas.  This provides an expanding market for natural gas that is being replaced by renewables in the US.  The co-optimization process described above can be used to study the effect of different levels of LNG exports on the price and demand for gas in North American power markets.

Low gas prices enabled by the shale revolution led natural gas to significantly displace coal as the primary power generation fuel in the United States. Economics and public policy are driving the rapid growth of solar and wind generation, and that trend appears very likely to continue throughout the next decade. Unsurprisingly, environmental policies are expected to have significant impacts on natural gas consumption.

Fully consistent co-optimized gas-power models of the entire North American market are not currently available using any other methodology. GPCM’s flexibility allows it to be readily integrated with commercially available power market models. Analytical solutions that fully consider the interdependent relationship between gas and electric markets will allow market participants to make the most informed decisions possible. To this end, RBAC and Energzyt continue to collaborate on gas-power modeling integration and analysis so expect to see further commentary soon.

Energyzt Advisors, LLC is a global network of energy experts working together to understand the changing dynamics of energy markets to create a competitive advantage for companies investing and operating in those markets. For more information, visit http://www.energyzt.com.

© 2021 RBAC, Inc. All rights reserved.  GPCM and GPCM Natural Gas Market Forecasting System are registered trademarks of RT7K, LLC and are used with its permission.