Natural Gas Immunity to COVID-19? How a New Normal in the Natural Gas Markets May Appear

The ongoing pandemic has impacted society in drastic ways. Even as governments around the world experiment with easing lockdown restrictions, a sense of normalcy may not return for a while. What will that new normal look like when it does? The energy industry has experienced profound changes during the past few months, many of which have been painful for those employed by it. There are a few silver linings, however. Air pollution has plummeted in many major metropolitan areas since automobile traffic has been greatly reduced while people work from home or have become temporarily unemployed. Many individuals and organizations have experienced full-time remote work for the first time. A review of the initial U.S. energy consumption data over the past two months shows that two of the most drastic reductions in consumption come from the transportation and commercial sectors. People aren’t driving nearly as often, and many stores and office buildings have been closed. RBAC’s recently released 20Q1base forecast reflects this story, but the scenario assumes that things will return to normal in late 2021. However, it’s quite plausible a new normal will include a more working from home and less commuting. How would energy markets look like in this new normal? 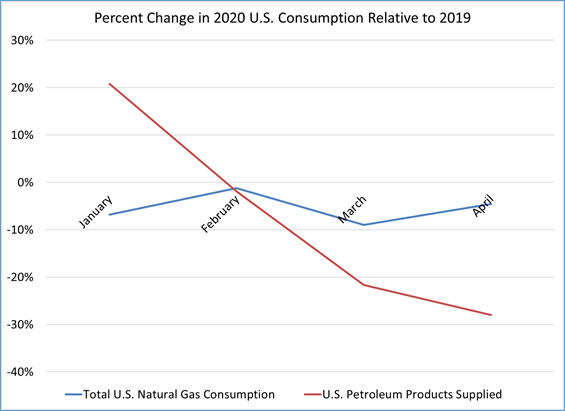 Oil markets have experienced far more turmoil than natural gas markets. There are a few factors at play, but one of the most important is the different end uses of the commodities. A large percentage of refined crude products are used as transportation fuels. The EIA reports that U.S. product supplies of motor gasoline has declined by 40%, fuel oil by 20%, and jet fuel by 62%1. The pandemic has shocked energy markets globally as well. Such a drastic reduction in demand combined with oversupply due to the Saudi Arabia and Russian oil price war caused the WTI contracts for May delivery to plunge to nearly negative $40/bbl. 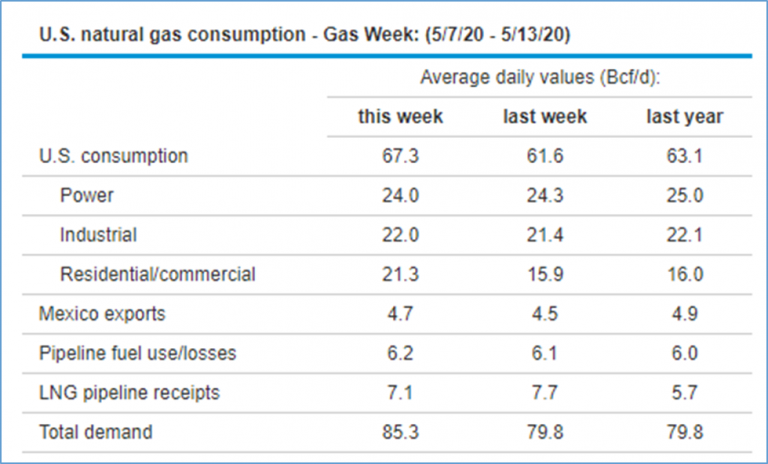 Reductions in natural gas demand (including exports) have been far more modest in contrast. Overall natural gas demand in the US during the week of May 7th – May 13th has increased since the same period last year, although this recent increase is likely weather driven. So far, the main impacts from the pandemic have been experienced in the commercial and industrial sectors. The largest demand impacts to date occurred during late March, according to EIA data. EIA figures showed industrial consumption down approximately 10% relative to last year, while residential/commercial were down 8%. While the EIA reports the aggregated value of the commercial and residential sectors in their most timely datasets, this scenario uses the assumption that the brunt of the reduction is felt by the commercial sector because of stay at home restrictions. In fact, there may be modest gains in residential gas consumption. LNG exports have also been impacted. As of May 19th, receipts from LNG feed-gas pipelines are down approximately 1.5 Bcf/d since April, although volumes still exceed those during the same period a year ago. Significant decreases in LNG export volumes may materialize over the coming months, as there have been reports of force majeure cancellations to LNG cargoes. Finally, U.S. imports from Canada and U.S. exports to Mexico have held relatively steady, with each only down about 200 MMcf/d since April, which represents a 2% decline for Mexican flows and a 5% decline for Canadian flows.

Overall electricity consumption is also down during shelter-in-place orders, but most of the reduction appears to be impacting coal-fired generation. Low natural gas prices have often made gas-fired generation more economic than coal-fired generation. Grid operators are reporting that weather adjusted weekly average energy consumption has fallen from 5 to 8.6% depending on the region, but natural gas consumption in the electricity sector is down less than 2% relative to the same point last year. When looking at generation by fuel type across the U.S., coal-fired dispatch is clearly on the decline. The shelter-in-place orders are impacting the same consumer categories of electricity and gas, i.e., grid operators are reporting that the greatest reductions have come from their industrial and commercial customers. There are many uncertainties that could affect natural gas consumption in the power sector. How might increased renewables penetration impact the outlook for gas demand from the power sector? Using RBAC’s Power Model Interface, users can integrate GPCM® with widely used electric production cost models for fully consistent gas-electric forecasts to answer such questions.

Since natural gas demand is not as impacted as that of oil, large reductions in oil-focused drilling are likely to leave a void in natural gas supply through declines in associated gas production. Major crude oil price declines have led producers to scale back drilling operations in areas such as the Bakken, Permian, DJ Basin, and Arkoma. The number of active horizonal drilling rigs in the Bakken, Eagle Ford, Permian, Niobrara, and SCOOP & STACK declined from 571 to 256 between March 13th and May 8th, a decline of 55%. The Permian basin produces large volumes of associated gas – over 12.3 billion cubic feet per day of dry gas in December 2019 (approximately 13.5% of total US production at the time). The price of this gas is secondary to the price of the oil and other liquids produced from the well and, thus, is less impactful on the potential profitability of the well. Gas-focused drilling has also been scaled back, but not at the same magnitude as oil-focused drilling. The most likely locations for a non-associated drilling rebound are the Haynesville shale because of its proximity and access to domestic and global markets, and the Marcellus shale because of its competitive production economics.

RBAC’s recently released 20Q1 outlook assumes that natural gas demand nearly returns to normal at the beginning of 2021. But what if current events change long-term trends in energy consumption? More specifically, suppose that commercial demand is 5% lower in the future and residential demand is 3% higher to simulate a greater percentage of the workforce telecommuting on a more frequent basis.

It is also uncertain the degree to which global transportation will recover throughout the next few years. The study team has assumed steep reductions in oil and gas production, particularly in oil-focused plays, through 2021 in the 20Q1base outlook, but a robust recovery beginning in 2022. The oil glut could persist for quite some time and lead to a long period of low oil prices, driven by lower demand for transportation fuels. RBAC’s “New Normal” scenario assumes that any significant recovery in oil-focused areas will not occur until 2023. Gas production recovery will more likely occur in non-associated gas production in the Marcellus and Haynesville shale formations. To simulate this scenario, the study team reduced future supply curves in liquids-focused areas such as the Permian, Niobrara, Bakken, and Utica by up to 25% relative to the 20Q1base scenario and increased the price elasticity of supply in the Marcellus and Haynesville to induce a quicker supply response from these areas should higher gas prices justify it. 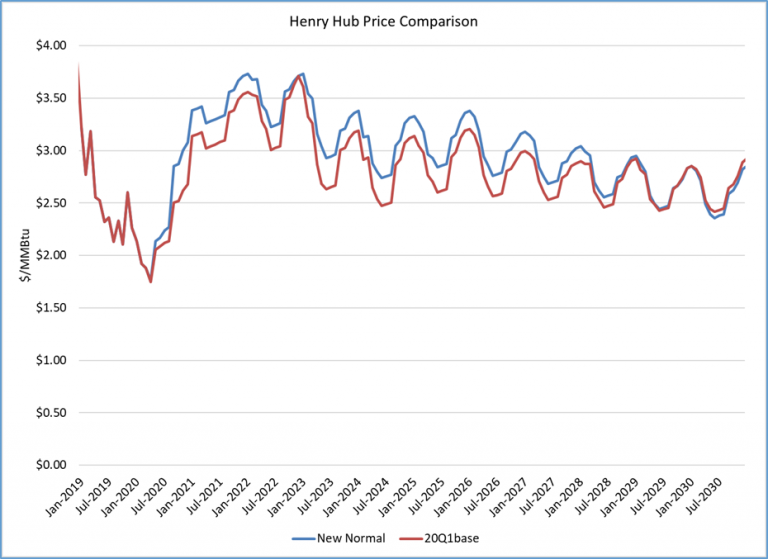 However, the scenarios significantly contrast upon closer inspection. Supply growth during the 2020s has shifted away from the Permian and other liquids-focused basins towards the Marcellus and Haynesville shale formations. Permian basin production is on average 3,331 MMcf/d lower in the “New Normal” scenario than 20Q1base, while Haynesville and Marcellus production are 886 MMcf/d and 1,727 MMcf/d higher. These shifts have significant impacts on pipeline flows and regional prices. The GPCM Natural Gas Market Forecasting System™ offers powerful results-reporting to help users understand the complex network effects of changes in the natural gas market. Further, GPCM can be integrated with widely used business analytical tools such as PowerBI. Below are source-to-destination flow reports for the 20Q1base and New Normal scenarios that have been filtered to show the supply sources for the West South-Central census region. The shift away from Permian to Marcellus and Haynesville also means that these locations serve more local demand and Haynesville helps serve LNG export demand. 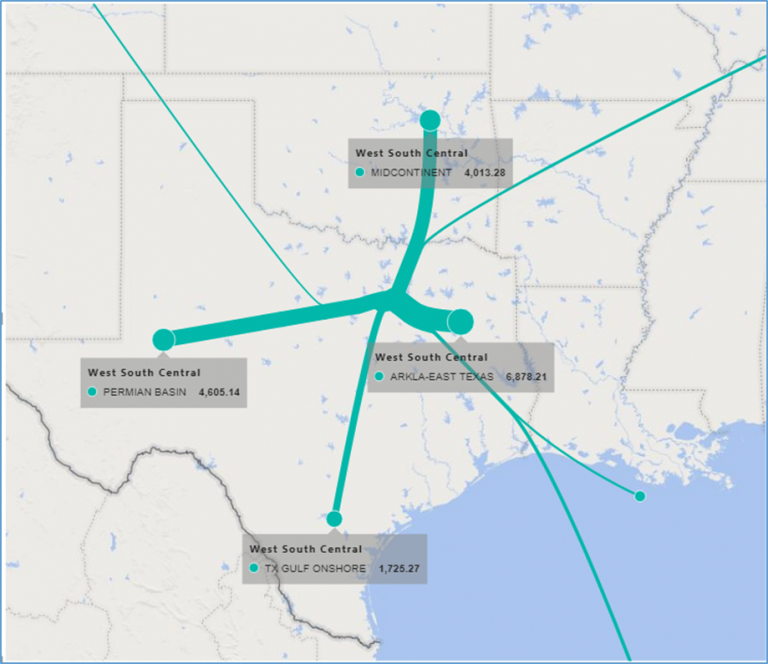 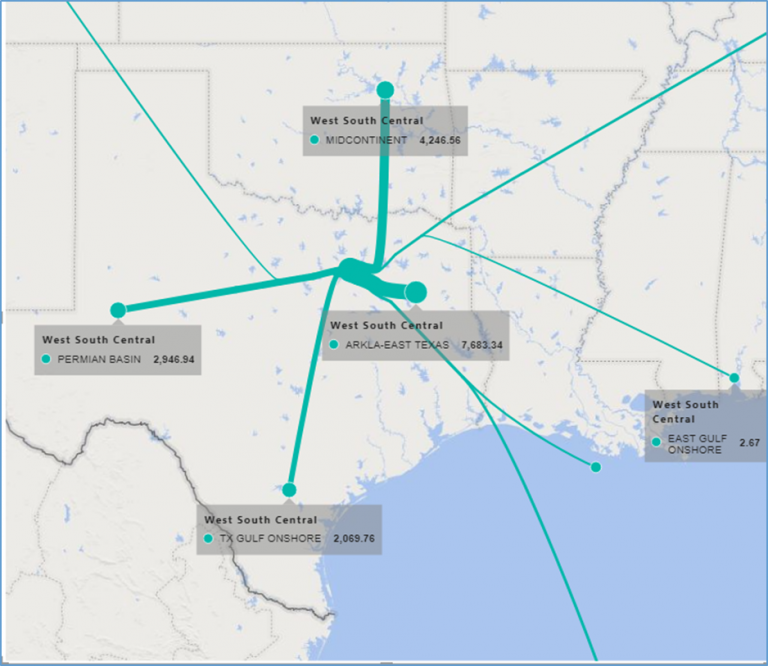 In addition, low oil prices will likely lead to higher future gas prices in the Permian basin. Natural gas prices at Waha have been persistently low for years due to a lack of takeaway capacity for the large volumes of associated gas produced in the Permian basin. 20Q1base showed that Permian Highway would only temporarily relieve low gas prices in the area and that additional infrastructure would be required to mitigate continued pipeline congestion. However, with a lower regional production forecast in the “New Normal” scenario this bottleneck in pipeline capacity no longer occurs – a small consolation to producers in the basin. The 20Q1base scenario predicts the need for additional infrastructure near Waha in April 2023. GPCM’s auto-expansion feature allows the modeling system to expand infrastructure when specific economic and timeline hurdles are met. 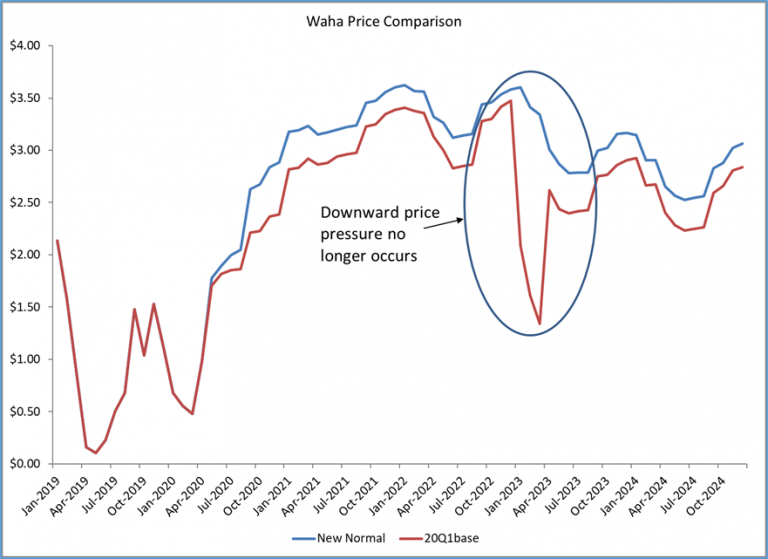 Like supply, differences in demand in the scenarios are primarily a shift from one location to another. U.S. Commercial demand averages about 500 MMcf/d less in the “New Normal” while residential demand increases by approximately 375 MMcf/d to nearly offset the commercial reduction.

Oil and gas consumption patterns may be altered for some time as people travel less and telecommute more frequently. In contrast to crude oil consumption, total natural gas demand has not been drastically reduced, though there have been significant shifts between some sectors. While natural gas markets have not experienced the same level of turmoil as crude oil markets, the two markets are significantly interconnected. Non-associated gas producers may have an opportunity to meet the void left by declines in associated gas production due to downturns in the oil market, leading to changes in pipeline flows and regional constraints. There are bound to be lasting changes in the aftermath of COVID-19, but a New Normal may not dramatically alter natural gas markets in the long-term.

GPCM provides users a very easy and straightforward method for setting up such scenarios to quickly assess potential market impacts. This report is of the most recent in a series of articles that demonstrate GPCM’s capabilities and ease of use, as RBAC continues to investigate how COVID-19 impacts global gas supply and demand market dynamics.

Home » Natural Gas Immunity to COVID-19? How a New Normal in the Natural Gas Markets May Appear