What are the market impacts of a shut down?

Energy Transfer’s Dakota Access Pipeline (DAPL) could still be shut down around March 2022 pending the results of the Army Corps of Engineers’ ongoing Environmental Impact Statement. The 570,000 barrel per day (bpd) pipeline transports crude oil 1,172 miles from the Bakken Formation in North Dakota to Patoka, Illinois before continuing the journey to either the US gulf coast via the ETCO pipeline or to other destinations throughout the US. What are the implications to US gas markets should this project ultimately be shut down? 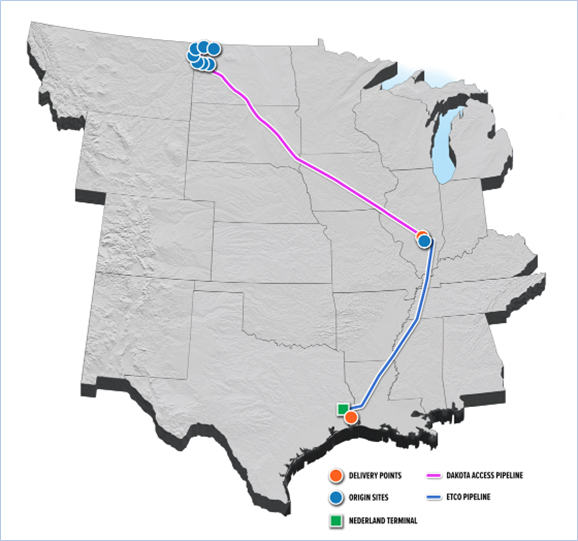 On July 6th, 2020, the US District Court for the District of Columbia ordered DAPL to be shut down within 30 days. However, on January 26th, 2021, the Court of Appeals for the District of Columbia Circuit, “affirm[ed] the district court’s order vacating DAPL’s easement and directing the Corps to prepare an EIS [Environmental Impact Statement]. We reverse to the extent the court’s order directs that the pipeline be shut down and emptied of oil.”[2]  The US Army Corps of Engineers subsequently stated that they will not shut down the pipeline in the interim and are currently preparing an Environmental Impact Statement. Consequently, though DAPL remains operational, the pipeline could still be shut down when the EIS is completed around March 2022.

While the Bakken is primarily an oil-producing formation, it still produced approximately 2,000 million cubic feet per day (MMcf/d) of associated gas in March 2021. Thus, an important question is, what would be the impact to natural gas markets should DAPL be permanently shut down in March 2022?

Wells will be shut-in if there is no way to transport crude oil to market, resulting in declines in oil and associated gas production. In the near-term, producers would transport as much crude oil by rail as possible, but it seems unlikely that all of the lost capacity on the pipeline, which transports an estimated 40% of Bakken oil production, would be replaced by rail shipments. The state of North Dakota estimated that up to 400,000 bpd would be shut-in in the near-term as a result.[3]

Estimates derived from state production data show that the overall gas-oil ratio for the Bakken during the most recent 12 months is 2.05 million cubic feet per thousand barrels of crude oil. If 400,000 bpd of oil production were to be shut in, the corresponding reduction in associated gas could total 821 MMcf/d. We used the GPCM® Market Simulator for North American Gas and LNG™ to evaluate what an 821 MMcf/d reduction in Bakken associated gas production would mean for natural gas markets by contrasting it to RBAC’s recently released 21Q1base forecast.

The results show that there would likely only be a modest impact to the overall US natural gas market, but it would be yet another blow to operators in the region which have struggled amid the very low crude prices during the past year – no assessment has been made related to the impacts from lower NGLs production and associated economics but certainly this would add to the negative implications. Contrasting the two scenarios outlined above, an 821 MMcf/d decline in Bakken production is predicted to increase the monthly average Henry Hub price by $0.14/MMBtu until takeaway constraints are resolved. Regional prices, as measured by Chicago Citygates, experience a similar impact of $0.14/MMBtu.

An 821 MMcf/d decline in production would represent a significant regional decline – about 29% of total gas production in the West North Central census region. While Bakken area production in the “DAPL Closure” scenario declined 821 MMcf/d amid well shut-ins, producers located in the Haynesville, Permian, Marcellus, and Western Canadian Sedimentary Basin step in to fill a portion of the void. Total North American production fell by a lower amount, an average of about 450 MMcf/d. One would expect the impacts to be greater in the immediate aftermath of a DAPL shutdown not only because it takes time to solve logistical challenges, but also because other producing areas will absorb the lost Bakken market share over time.

What does this mean for the future?

The Dakota Access Pipeline remains operational while the US Army Corps of Engineers completes an EIS. Should DAPL be permanently shuttered in March 2022 after the completion of the EIS, the overall impact to natural gas markets should be relatively modest. Impacts to Bakken production would be more significant. Higher cost crude shipments by rail would offset a portion of the loss of DAPL, though the extent of these offsets remains unclear. The state of North Dakota estimated as much as 400,000 bpd could be shut-in in the near term, which could translate to as much as 820 MMcf/d of associated gas being shut-in. Such a loss represents approximately 40% of current Bakken associated natural gas production in North Dakota.

The overwhelming majority of crude oil in the United States is transported by pipeline because it is the cheapest method. Truck and rail methods are used when pipelines are unavailable and oil prices are high enough to make these methods economical. All forms of transportation pose some risk, but a single derailment on a crude oil shipment by rail can have a large environmental impact. The 2013 derailment in Casselton, North Dakota spilled approximately 11,333 barrels of crude oil.[4] The 2013 Lac-Megantic train derailment in Canada, which carried Bakken-sourced crude oil, was truly devasting. The derailment killed 47 people, destroyed over 40 buildings, and required over 2,000 people to be evacuated.[5]

The Standing Rock Sioux tribes remain in opposition to the project, but not every tribe in the region is opposed. The Mandan, Hidatsa, and Arikara Nation receive significant royalties from oil and gas produced on the Fort Berthold Reservation, much of which is shipped on DAPL.[6]

Longer term, the shut-ins and higher transportation costs for Bakken production would further stress producers in a higher cost region that has struggled during the past year. DAPL would join other projects such as the Atlantic Coast Pipeline that was cancelled amid litigation over environmental permitting. Growing public opposition and litigation related to oil and gas pipeline projects suggests that pipeline development may become increasingly difficult in the future.

© 2021 RBAC, Inc. All rights reserved.  GPCM and GPCM Market Simulator for North American Gas and LNG are registered trademarks of RT7K, LLC and are used with its permission.