In the 2009 global recession, European natural gas demand fell about 2% with the Covid-19 global pandemic, 2020 looks to have an even greater impact on the natural gas market than in 2009. The decision to implement Social distancing or “Shelter in Place” policies to combat Covid-19 seems to be one of the main reasons for the greater impact on the market. Although there might be some gas consumption for residential and electric use as we move into the summer, natural gas demand is still expected to go down. Commercial and industrial sectors could be forced to shut down or reduce their production to deal with the lower demand as well as reduce the risk of COVID-19 affecting their employees. The drastic decline of public and commercial traffic will shrink demand by natural gas-fueled vehicles (NGV). Europe is one of the most highly affected regions of the Covid-19 pandemic. According to Rystad Energy, European energy demand forecasts have been reduced by an additional 0.7% compared to their previous forecasts. Germany, Italy, the United Kingdom, France, the Netherlands and Spain are facing a large drop in absolute volumes in natural gas demand. 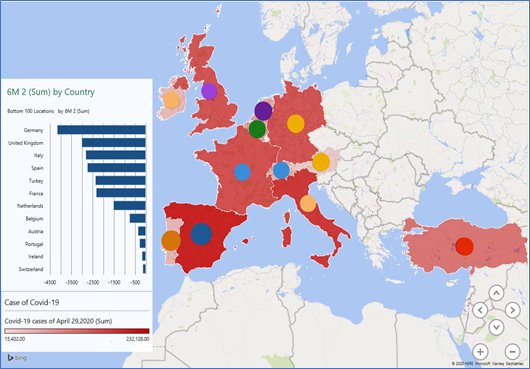 The biggest challenge Europe faces right now is understanding the full impact of Covid-19 and how long they will last. Therefore, based on a set of assumptions of recovery, we ran three scenarios; a 3-month, 6-month, and the worst case scenario, 12-month recovery period.

Most countries in Europe did not implement locked down policies until the middle of March compared to countries in Asia, who started locking down between the end of January and beginning of February. The lockdowns have had a great impact on social and economic activities throughout European countries. When we look at the electric sector, natural gas demand in electricity accounts for the significant part of overall European gas demand, which account for about 20% of demand in 2018.

In the most recent weeks, the real-time electricity demand in Italy, France, and the United Kingdom has decreased by about 30% compared to the same period in 2019. Other countries, such as Germany, Spain, Poland, and Eastern European countries had losses of at least 10% of the electricity demand. For example, Italy has about 25% unused gas-fired power generation capacity, beginning the week it announced the lockdown of cities, which is Week 2 (March 10, 2020) in the chart. This caused a dramatic decline in power prices after the implementation of lockdown policies as COVID-19 spread throughout Europe. According to IEA’s report, in the first quarter of 2020, the demand for electricity in European countries is decreasing from 10%-30%. In that, for countries, such as Spain, Italy, and France, it assumes a decline of at least 20% while other countries will see at least a 15% decline in demand. Using the G2M2® Global Gas Marketing Modeling System, RBAC’s estimates show that the primary gas consuming counties, such as Germany, Italy, and United Kingdom, would only face a 1%-3% decline if they could recover by mid-June and around a 3%-6% decrease if recovery takes place in the middle of September. Italy, the United Kingdom, and Spain will take a bigger hit in absolute volumes of electric gas demand.

Because of the spread of COVID-19, European Union steel production has already been cut by 50%. The situation would be worse with the new order bookings down by about 75%2. Italy’s industrial heart, Lombardy, has shut down the majority of steel producers and temporarily halted output. According to S&P Global Platts’ analysis3, by March 20th, overall industrial gas demand in Italy has fallen over 6% compared to the same period in 2019.

Based on the level of impact on European industries, RBAC assumes different reduction rates of gas demand by country in Europe to look at the impact over a short-term period and a long-term period. For most European counties, if we see good recovery in June, the losses of gas demand are about 3%-4%. However, if the Covid-19 impact continues to last through this autumn or to next year, the loss of gas demand will increase to around 6%-10% in industrial sector.

Central Europe and Northwestern Europe will lose the most volumes of industrial gas demand in these scenarios with Germany, France, the United Kingdom, and Spain having the most severe impacts.

From January 2020, many countries significantly reduced their aviation activities due to the spreads of COVID-19. China canceled 70% of their flights at the beginning of February, and now more than 40% of their flights are still canceled due to global travel restrictions. While Singapore, Hong Kong, Spain, Germany, UK, France canceled more than 90% of their flights. According to DGCA, Indian domestic air passenger traffic fell by 33% in March4 . Rystad Energy predicts that road fuel usage fell around 33% in April and will fall 11% for the year, while jet fuel dropped 64% in April and an estimated 31% for the year. It is predicted that from May to the end of this year, the demand for roads and jet fuel will recover to average levels.

Besides aviation activities, commercial transportation activity has also had a significant decline. Heavy-Duty trucks (HDT), Medium-Duty trucks (MDT), and Light-Duty trunks (LDT) are at about 89%, 80%, 85% of regular activity levels from February to March in North America. The reduction of this commercial traffic has had an impact on industrial, commercial, retail, and other economic activities. With such a drop in traffic a significant decline in fuel consumption was expected.

In Europe, natural gas demand in transportation only accounts for a small part of total gas consumption. Some gas is used in pipeline transportation, but the major part is used for natural gas vehicles. For example, Italy has the most significant number of natural gas-fueled vehicles (NGV) in Europe, which is about 1,004,982 in 2018, and annual consumption is about 1.4 Bcm.

From the chart above, south and southwestern Europe (64%) consume the most natural gas for transportation, especially in Italy and Spain. The lockdowns in those countries cut down public activities and public transportation sharply. In that, although transportation gas consumption accounts for a small ratio in European total gas consumption, the percentage effects on it would be more significant.

Italy announced a nationwide lockdown on March 9, which affected 60 million residents, while other countries in Europe issued their lockdowns in the following weeks. These lockdowns will last at least another month or longer. Before COVID-19, according to Global Workplace Analytics’ analysis of 2018 American Community Service (ACS) data, 3.6% of the workforce worked from home. Now it’s about 56% of workers who are working from home. Therefore, theoretically, the gas demand of residential gas should increase. In actuality, due to the milder weather in Europe, the gas demand has been pushed down.

Considering the milder weather, residential gas demand in Europe has steadily declined in 2020, as seen in RBAC’s different scenarios. Base on the length of lockdowns and recovery periods, RBAC believes that commercial gas consumption will have a sharper decline than residential partly due to the closure of education and commercial buildings. As we can see from the chart, the top 10 countries, including Germany, France, the United Kingdom, and Italy, have large volumes as well as ratios in commercial gas demand. Those countries have closed most commercial buildings and let people stay at home for over one month.

The top 10 counties of gas demand in Europe are Germany, United Kingdom, Italy, Turkey, France, Netherlands, Spain, Belarus, Belgium and Romania. Due to the different energy structures by country in gas consumption, the total COVID-19 impacts are varied by countries in Europe. Spain will take the biggest hit in percentage changes as its industrial use is about 50% compared to Italy, which is about 15%. Germany, Italy, the United Kingdom, and France will face a big loss in absolute volumes.

In a 3-month recovery scenario, the total impacts on Germany is about 2%, however, if the recovery is longer than 6 months, the impacts would be about 5%. The percentage of total impacts for other countries, such as France, United Kingdom, Switzerland, Turkey, Ireland, are similar to Germany. Italy and Spain will reduce about 2.2% and 2.8% of gas demand in a 3-month recovery scenario, respectively. Countries in full lockdown and the expected recovery period is the next year are experiencing a more than 5%. Spain will take the biggest hit in percentage, which is about 8% in a 12-month recovery.

Although there are many factors that play a role in the overall impact of Covid-19 on European gas demand, having the ability to run many “what if” scenarios around the speed if recovery and changes in supply and demand dynamics will be vital in creating an effective strategy for handling the current and any future global event to reduce risks and maximize the ability to recover quickly.

© 2020 RBAC, Inc. All rights reserved. G2M2 is a registered trademark of RT7K, LLC and is used with its permission.