Per Xinhua news agency, on Jan. 9, 2020, China’s Ministry of Mineral Resources announced today the opening of exploration and production to private investment. Domestic and foreign companies with local net assets of at least 300 million yuan ($43 million) can apply for licenses. The reform will take effect on May 1, 2020. This announcement is part of a wider policy of domestic market liberalization and of reducing the role of the three major National Oil Companies (NOCs), alongside the development of natural gas trading hubs, and the creation of a National Oil & Gas Pipeline Company.

It is no surprise to most in the industry that this opening to private investment also aims at reinforcing China’s security of supply by increasing domestic oil and gas production. Using RBAC’s G2M2® Global Gas Market Modeling System™, we can employ hard data and evidence to look at the strategic value of such a move through the following analysis.

First, China’s gas demand growth has been outstripping supply with a quickly widening gap. This puts pressure on China to increase its reliance on foreign sources of natural gas, and there is no sign of closing the gap within the forecasted period, with current projections of demand and supply. The following chart shows production versus consumption for China from 2011 to 2040. We calculate a ratio of production over consumption to indicate the level of self-sufficiency and security for natural gas.

For China, although it has always been an importer of natural gas, the need has increased significantly in the last decade, mainly due to fast growing demand. The gas security ratio started at about 80% at the beginning of the last decade but dropped to about 50% in 2019. This year could be the first year that more than half of China’s domestic demand would be relying on foreign sourced supplies. This demonstrates the significance and urgency of China’s need to increase its domestic supply, which perfectly aligns with the timing of yesterday’s policy announcement. 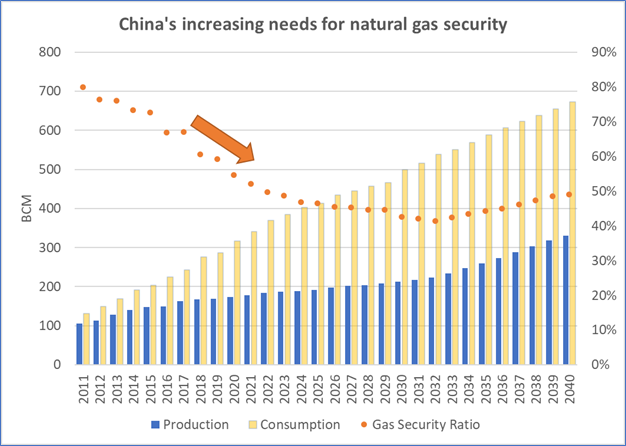 One might ask why this is so important for China? There are a lot of countries in the world which rely on imported natural gas, and there is a booming world trade market for LNG. Well, it is true that the global LNG market is providing valuable and flexible importing options for many countries, including China. This is a welcome trend for many gas importers as a more liquid market presents greater reliability and security. China has been an active participant and advocate in developing the LNG market in the past five years, investing in LNG contracts and LNG trading platforms in the region. So, it implies that China considers LNG and imports of gas a valuable source of supply going forward.

However, with consumption expected to reach 850 MCM/day (million cubic meters per day) – around 316 BCM per year, in 2020, China has become the third largest gas user in the world, following the US and Russia. Putting in perspective, entire EU countries consumed about 500 BCM in 2020.

As China has clearly stated and recognized in its five- year plan for the last decade, China needs a lot more natural gas to fuel its economic growth and to reach its decarbonization target in the energy transition ahead. In particular, in the next 5-8 years, China is expected to surpass Russia to be the second largest gas user. By 2040, China is expected to add another 1000 MCM/day (365 BCM/year) of gas consumption.

The chart below shows the top 10 countries with largest gas consumption by 2040, in terms of their production, consumption and gas security ratio (same definition as previous chart). For the top ten countries of gas consumption in the world, half of them are self-sufficient with a gas security ratio greater or equal to one. Although there are another 5 countries out of the ten needing imports of gas, China’s total need is about 4-5 times bigger than the rest (Mexico, India, Japan and UAE). 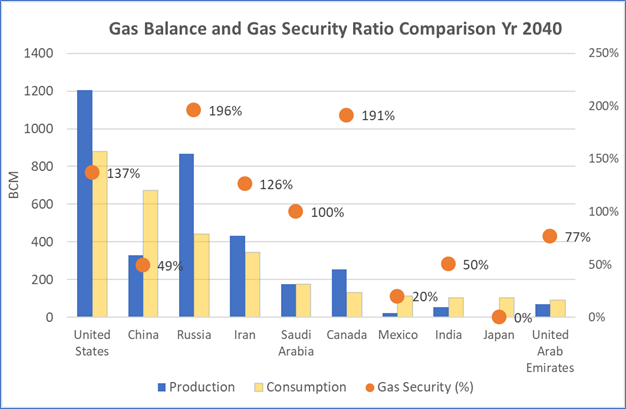 In the last chart below, we have included all countries with greater than 100 MCM per day of gas consumption (36.5 BCM per year) and ranked them based on their gas security ratio (production/consumption). The red line is the ratio of 1 – where production is sufficient to match consumption. For the group as a whole, the ratio is about 1.08, which implies that most of the large gas users tend to also have sufficient domestic production. 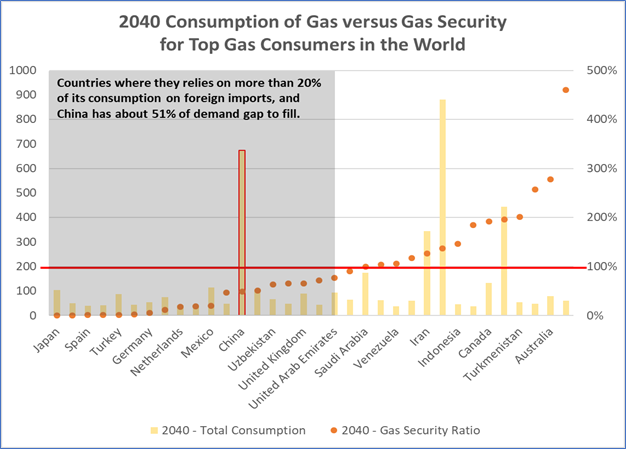 The result is quite interesting, because it quickly highlights all the major buyers and sellers of LNG trade in the world going forward. Qatar has the highest ratio of close to 500%, while Taiwan, Japan, Spain and France have the lowest ratios. Although China does not have the lowest ratio, its mere size of market as highlighted in the chart stands out in the crowd and makes its strategy on securing and improving gas security more strategic and critical.

© 2020 RBAC, Inc. All rights reserved. G2M2 and G2M2 Global Gas Market Modeling System are registered trademarks of RT7K, LLC and are used with its permission.