Gazprom’s Hard Choices are Europe’s Too

Houston, Texas, April 5, 2019 – In the April 1, 2019 newsletter article “Gazprom Faces Hard Choices:  Naftogaz Ukrainy”, Natural Gas World’s Editor in Chief, William Powell, quoted Andrei Kobolev, CEO of the integrated Ukrainian monopoly Naftogaz, as follows: “Russian gas pipeline monopoly Gazprom will not manage to complete Nord Stream 2 by the start of next year, forcing it to either cut its exports to Europe or to reach a new transit agreement with Naftogaz Ukrainy that satisfies EU terms and conditions.  And without TurkStream 2, it will not even be able to meet its minimum contractual supply volume.”

Houston-based RBAC foresaw this dilemma three years ago. In 2016 at the IAEE Conference in Baku, Azerbaijan, RBAC’s Founder, Dr. Robert Brooks, reported results of a study addressing what would happen if Gazprom and Ukraine failed to negotiate a new transit agreement before the existing one expired at the end of 2019.  Using the G2M2® Global Gas Market Modeling System, the RBAC team found that the proposed pipeline solutions, including Nord Stream 2, Turk Stream, Trans-Caspian, and the Southern Gas Corridor would not be sufficient to meet Europe’s expected demand, even with expanded imports of LNG. 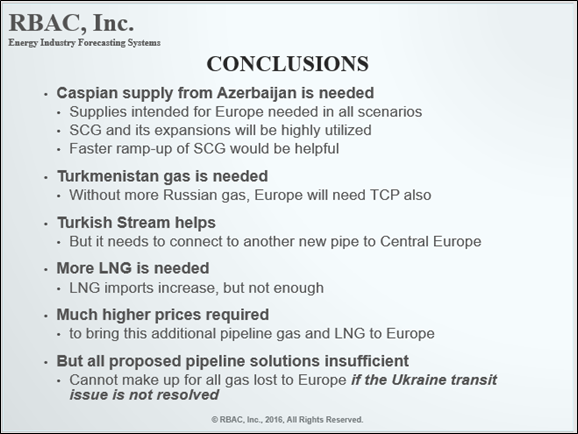 When asked to comment on the Naftogaz statement, Dr. Brooks said, “The European gas security situation remains in flux. Recent events further corroborate what we found in 2016:  new supplies from the Caspian plus Russian pipeline bypasses of Ukraine cannot make up for gas lost in a no-Ukraine-transit scenario.  Other potential sources such as Turkmenistan, Iraq, and Iran remain extreme longshots.  Prospects for the East Med Pipeline are brighter but involve major geopolitical challenges; it would take years to get built even if these issues were successfully resolved.  In addition, Gazprom is having trouble selling the EU on a project to move gas from Turkey to Europe in an extension to Turk Stream and production in the Netherlands is declining even faster than we foresaw in 2016.  The one bright spot is rapidly expanding LNG supply from the US and Australia and greater acceptance of LNG by Germany and other European countries.”

Dr. Brooks stressed the importance of advanced predictive analytics and simulation in 21st century natural gas and LNG business. “Today’s global gas market is too dynamic and complex to understand using yesterday’s outdated methods. To stay ahead of the curve, we are constantly tracking the evolution of the market and updating G2M2’s knowledge base and modeling capabilities in support of G2M2 users around the world.”