Even though COVID-19 related demand reductions heavily impacted Liquefied Natural Gas (LNG) demand across the world, India experienced a rise in LNG and overall demand throughout 2020. This has resulted in analysts across the market believing India, globally the 4th largest importer of LNG, could see a continued growth through 2021 and beyond. India took substantial advantage of low spot prices in 2020 as imports peaked when the COVID-related demand slump hit Northeast Asia in February.

Falling spot prices clearly had a major effect on demand in India. The figure below shows the historical prices of the residential and industrial sectors in India as well their forecasts through the end of the year. Right after lockdowns peaked in Northeast Asia, there was a stark rise in consumption across these sectors. This could suggest a lagged increase in consumption as a result of increased imports in April due to the largely reduced spot prices.

This year, spot prices are expected to be relatively competitive against legacy contract prices (which is linked to oil) and India is expected to take full advantage of this trend. Petronet LNG is leading the way by making spots deal using prices based on Platts West India Marker (WIM). WIM plunged to an all-time low of $1.763/MMBtu on 23rd April on the peak of lockdowns. Prices have recovered since then with WIM at ($6.464/MMBtu) on 7th December, as seen in the figure below.

This reaction suggests that demand for LNG in India is sensitive to price. Unsurprisingly, with relatively higher spot prices for the first quarter of 2021, we might not see imports as high as the same time last year. Analysts are expecting spot prices to drop again in summer 2021 which would lead to increased imports, and in turn demand.

RBAC’s G2M2® modeling system has robust scenario planning ability that can effectively adjust to these newly discovered changes and address them to get future forecasts accordingly. The global gas modeling team has been utilizing this powerful analytical platform to gain a better understanding on the evolving markets. Using this the team built a scenario that reflects an overall 10% year-on-year growth of India’s overall gas demand between 2020 and 2021 and came up with fruitful insights.

The total monthly consumption figures show an overall picture of how we will see double digit growth from the end of 2019 to 2021 due to the growth in imports. Imports have been up year on year, but down month-to-month with a 12% rise in November 2020 due to fluctuating spot prices.

There are certain reforms expected on a national level in the gas market which hold the key to expected rise in future gas demand in India:

Amidst rises in import and demand, local upstream production hasn’t been very convincing with a 4 BCM year-on-year growth expected compared to 3 BCM last year. A reason for this has primarily been attributed to low ceiling prices set by India’s Petroleum Planning and Analysis Cell (PPAC) which has led to lower incentives for a ramped up domestic production. PPAC set the domestic gas from October 2020 to March 2021 at $1.79/MMBtu which is below the breakeven costs of gas producers in the country.

Conversely, offshore gas production has been looking bright with the country’s east coast field is expected to produce 31 million metric tons of gas next year which is close to around 10% of India’s gas demand by 2023.

Prime Minister Narendra Modi inaugurated the 280-mile Kochi-Mangaluru natural gas pipeline built at cost of US$410 million and stated the importance of a gas-based economy in light of the ‘One Nation, One Gas Grid’ policy.  The goal is to connect the nation with one gas pipeline grid bringing affordable fuel to people and industry. This also aligns the Indian government’s goal, to diversify the country’s energy mix to increase the share of natural gas from 6.3% (current) to 15% by 2030. This is carried by a plan to build over 20,000 miles of gas pipeline network with a capacity of more than 800 million cubic meters per day, and a liquid natural gas (LNG) terminal capacity of 80 to 90 million tons per year. This would be result in a potential surplus which could lead to India being a significant exporter of refining and petrochemical products by 2030. 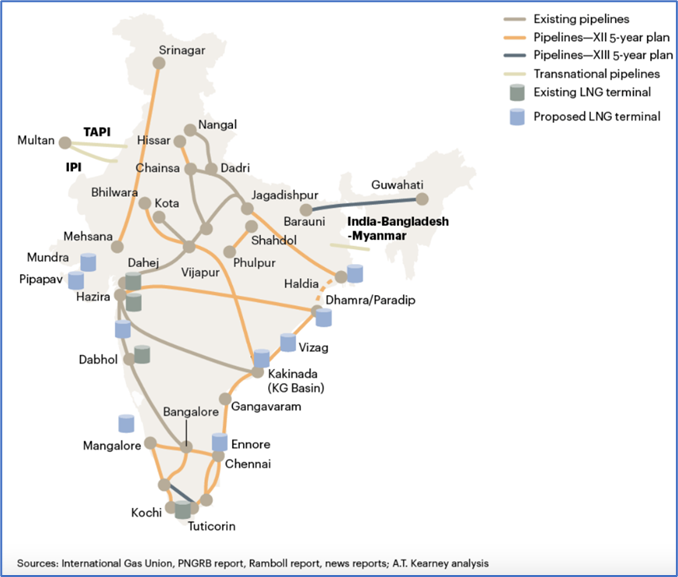 The Petroleum and Natural Gas Regulatory Board of India is close to sanctioning a major overhaul to the country’s unified gas pipeline tariff policy, which would reduce the barriers for LNG deliveries from the west (where most LNG is imported) to isolated regions in the east (specifically northeast) where there has been inadequate supply of gas. This new tariff scheme would most definitely help areas that are further away from gas sources as they would be paying a lower price for it. Buyers further away from sources are expected to be cross subsidized by buyers closer to the source to offset the transportation and pipeline costs.

India is also set to categorize all fossil fuels including natural gas under its Goods and Services Tax (GST) regime. Experts have argued this would massively increase stability in the power and steel industries where natural gas is a major input. This would also offset various excise duty and different value added taxes imposed by states as it would fall under a nationwide tax scheme.

Another important issue to consider when looking at India as an emerging market is potential outside investment. Top LNG exporter Qatar has created a task force to explore potential LNG based investment projects in India. Qatar delivers around 80% (8.5 MTPA) of India’s total imports, transporting LNG to its west coast-based terminals. “An estimated investment of 60 billion US dollars is lined up in developing gas infrastructure which includes pipelines, city gas distribution and LNG re-gasification terminals,” India’s Oil minister Dharmendra Pradhan said in September.

Given these advances, as investment and infrastructure projects get the green light from the regulators in India, running scenarios based on these upcoming projects and proposed changes in gas pricing will give the analyst a good reflection of what the future holds for India. RBAC’s G2M2® Global Gas Market Modeling System™ allows one to easily create and run a variety of scenarios to better understand these rapidly changing dynamics in India’s growing market and better identify both the risks and opportunities that lie ahead.

© 2021 RBAC, Inc. All rights reserved.  G2M2 and G2M2 Global Gas Market Modeling System are trademarks of RT7K, LLC and are used with its permission.