The Future of Natural Gas in China, Gulf and India: Opportunities and Challenges

According to the Oxford Institute for Energy Studies, the demand of natural gas in the Gulf countries will have a growth in 75% from now to 2030 which attributes to its development of urbanization and increasing of labor force. Also, the urgent requirements in its industrial and electric sectors should be considered. However, China aims to change this energy structure by increasing the use of natural gas which targets more than 10% in 2020 and 15% till 2030 and lower the share of coal use. With the rapid growth in GDP, huge population of labor force, fast development of urbanization, and the demand of sustainable development, China will keep a high-speed growth in natural gas consumption compared to the Gulf. On the other hand, according to CNPC, facing a faltering economy, China’s natural gas demand is expected to grow in a slower pace. Moreover, natural gas is still the relatively large share of Gulf’s energy mix, which ask for a diversified energy mix in the future. 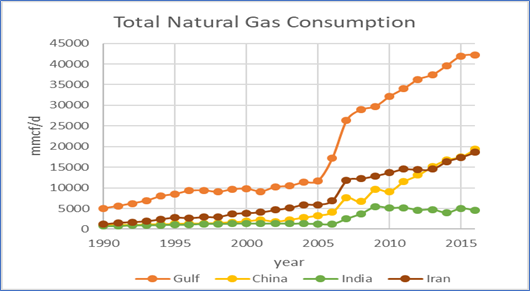 Although the total natural gas use in China is at the similar level to Iran in the recent years, besides the fast growth in natural gas consumption, the structure of energy consumption in China shows a larger space or potential to rise its demand of natural gas. On 25 April 2017, the National Development and Reform Commission (NDRC) and National Energy Administration (NEA) publicly released a strategic paper on “Energy Supply and Consumption Revolution Strategy (2016-2030)”, which sets out that natural gas should account for more than 15% of the mix till 2030. In 2018, natural gas consumption shares 7.4% of the total primary energy consumption compared to 53.1% in the Gulf, 67.9% in Iran, which should be doubled to meet its target in 2030. 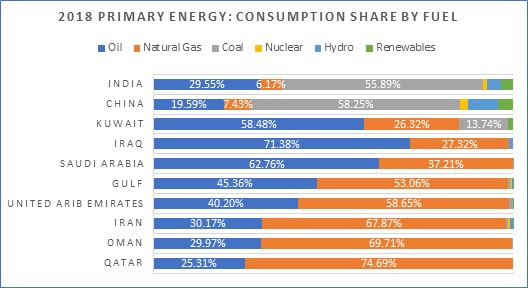 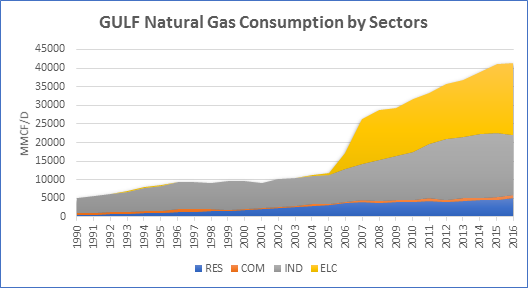 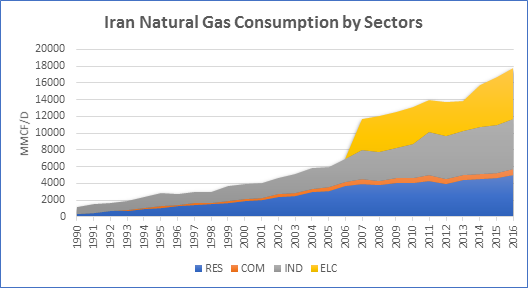 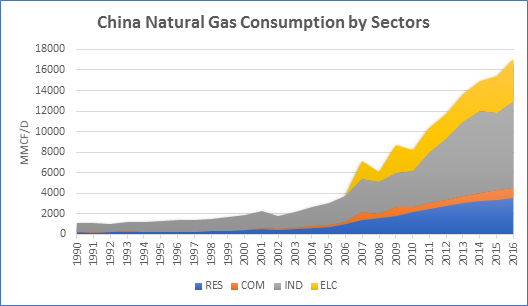 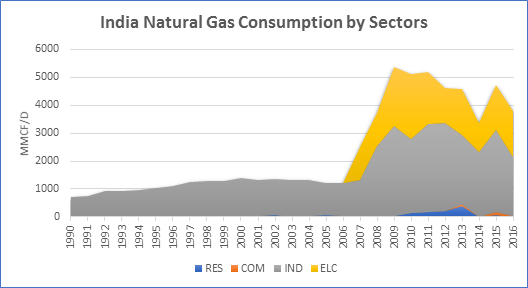 In details, the natural gas consumption shares of the main sectors are different among the Gulf, China, and India. China and India have larger shares of industrial consumption, while the Gulf has a balance share of industrial and electric consumption. From 2010 to 2016, the Gulf has a relative balance development in each sector. The fastest growth of the Gulf is in electricity sector, which is 38%, but industrial sector has a greater growth rate in China (135%). India has variations in electric and industrial sectors. In the future, in order to reduce the usage of coal and the development of industry, China and India have a strong growth in natural gas consumption. For the Gulf, the electric power generation sector will be the main driver of fast development till 2030, because the GDP of the Gulf (GDP PPP grows over 50% from 2018 to 2030), labor force (over 15% increase from 2018 to 2030), and urban population (about 3% averaged growth every 5 years till 2030) will all develop quite rapidly. However, the labor force growth would be negative (-6% from 2018 to 2030) in China, which reflects the trends of faltering economy in the following years and slowing the fast growth of gas demand in China. 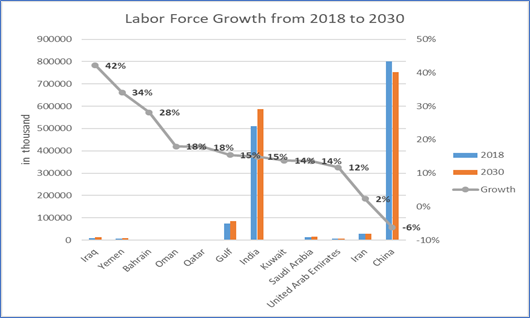 Nuclear and Energy Mix in the Electric Sector

From historical data in the electric sector, the natural gas consumption in China rises 106.32% from 2010 to 2016, which is the second fastest growth among the four main sectors-industrial being the strongest sector. The Gulf increases 38% from this period which may be related to the demand of desalination plants to make pure drinking water or for industrial usage. In the future, if it keeps this speed, it’s possible for the Gulf to increase more than 72% till 2030.

China, India and Iran use nuclear as one of the main sources for power generation. For the basic information, Iran has over 80% of natural gas, 12% of oil, 2.5% of nuclear for generating electricity in 2016. In 2016, the nuclear power generation shares 3.5% in China, and 2.6% in India. According to the latest news, Iran ends commitment to nuclear deal after general Soleimani killing. It shocks EU countries who have devoted to phase out nuclear use after Fukushima nuclear leaking in 2011. Will it change the energy mix in Iran? Will it change the demand of natural gas in the future? Will it change the natural gas market in the Mid-East?

According to IAEA, Iran has operated BNPP Unit 1 and generated power in a total of 25443 million KWh from 2012 to 2019. It saved 9460 million m^3 natural gas and the release of 32.1 million tonnes of pollutant or greenhouse gases to the environment. Iran has two more reactors which are under construction. One would be put in use till 2025, another one is 2027. The capacity would be tripled after five years, now the capacity of electrical nuclear plants is 1.02 GW (e). From 2015 to 2019, the electricity production from nuclear is from 2.95TWh to 7.48TWh, which is a great growth. If all the reactors are put into use, it would save about 4000 million m^3 natural gas in every year.

Although hydropower is one of the most important renewable sources for Iran, which account the largest renewable resource by generation capacity, it faces some barriers by the limitations of hydropower potentials. Of course, renewables have a large potential to substitute classic thermal production, but it’s not that competitive to other fuels. If the nuclear demand is relatively stable in the future, for balancing the energy mix in Iran, the natural gas would be substituted by oil, hydro and other types of fuels, so the gas demand projection is decreasing. Iran is expected to search for a diversified evolution in its development of energy mix.

Demand in Other Sectors 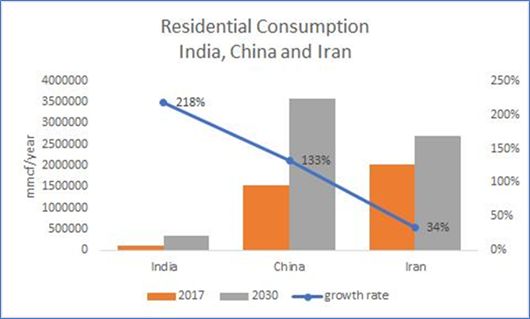 When we look at the commercial sector which is more related to the business or urban development, we will find China has a faster growth in commercial natural gas consumption than Iran. China will grow 140% from 2016 to 2030, however, Iran will increase 42% from 2016 to 2030. From 2016 to 2050, China will have a 273% increasing and Iran will have 75%. China’s growth follows its development of GDP. Iran’s growth trend follows the increasing of urban population. 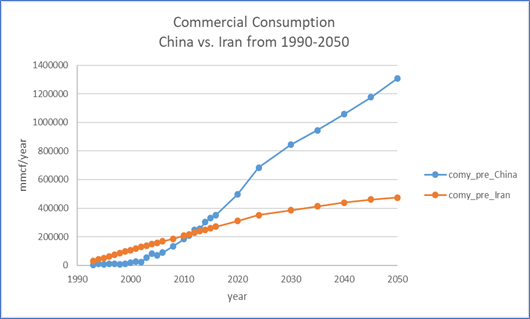 Source: IMF and projected by RBAC

Facing challenges in the future

In the following decades, China starts to change this energy structure by increasing the use of natural gas and lower the share of coal use which targets more than 10% in 2020 and 15% till 2030. With the rapid growth in GDP, huge base of labor force, fast development of urbanization, and the demand of sustainable development, China will keep a high-speed growth in natural gas consumption compared to the Gulf. Although it is expected to have a faltering economy in China, which will slow down the pace of natural gas demand growing, the oil and natural gas markets are still growing and the infrastructure constructions are under developing based on CNPC. The challenges for China are how to balance the surplus refining capacity and slow product oil consumption, as well as how to deal with the highly relay on imports of oil and natural gas.

But for the Gulf, if we don’t consider the other factors, it’s possible to grow in 75% which may come from its development of urbanization and increasing of labor force, also the requirements in industrial and electric demand. Although India’s natural gas demand is small, we still need to keep an eye on it. However, nuclear issue remains a challenging concern in this area which will also impact on the evolution of energy mix in the future. Based on the large amount demand of natural gas in Iran, according to the research of Stanford Iran 2040 Project, the costs of publicly funded wind or solar projects are significantly higher than gas-fired power plants, and the privately funded projects require a positive returns which confirm that it would be a long way to develop renewables in Iran. In the recent years, natural gas in Iran is still the dominate source.

© 2020 RBAC, Inc. All rights reserved. G2M2 is a registered trademark of RT7K, LLC and is used with its permission.