Where will China get its future LNG and why?

To achieve the economic and environmental objectives set forth by President Xi and the CCP earlier this year, China must substitute a huge amount of coal use in industry and electricity production with cleaner alternatives such as renewables and natural gas. But renewables can only be used for electricity generation and their intermittency creates serious reliability problems.  Natural gas does not have these limitations.  It reduces pollution when substituting for coal, it can be used for industrial applications which renewables cannot handle, and gas-fired power plants produce controllable, reliable electricity.  To meet China’s objectives, it must dramatically increase its consumption of and, therefore, supply of natural gas.

This increase will come from three sources: local production, pipeline imports from Central Asia and Russia, and LNG imports from many countries around the world.  While it would be best for most of this new supply to be provided by local production, it will not be enough.  Big strides have been made by China’s upstream production companies in production of shale gas in Sichuan province.  China is now the second largest producer of shale gas in the world.  But compared with the United States, Sichuan’s geology is difficult, and the cost of extracting shale gas is high.  Future production growth will be quite substantial, but it will not be enough to handle China’s requirements for more natural gas.

The figure below shows RBAC’s forecast of future gas requirements in China in the electricity production sector (ELC) and other sectors combined (non-ELC). China’s demand for natural gas will increase by a factor of 2.6 between 2018 and 2040.  Demand is growing about 20 billion cubic meters (BCM) each year from now to 2040.  In this same time, production is expected to double from about 150 to 300 BCM per year, which is a growth rate of about 7 BCM per year.  This means demand for gas from other sources must expand by about 13 BCM per year or about 300 BCM in total by 2040.  Where will this gas come from? 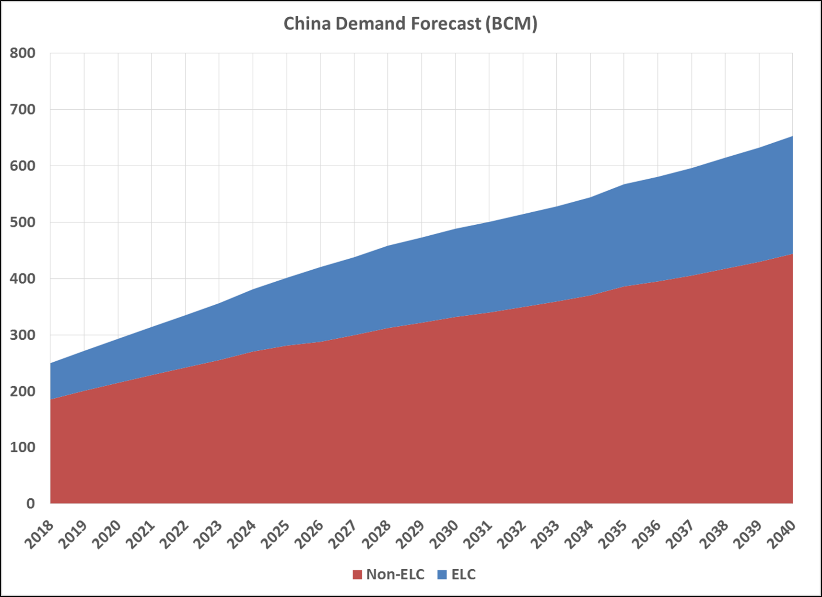 Fortunately for China and the entire world, due to improvements in upstream technology, especially over the past 12 years, natural gas has been proven to be much more abundant than previously thought. We have reached a point where a global gas and LNG market has finally become a reality.

China has executed an agreement with Gazprom to import gas from Russia’s Far East via the Power of Siberia Pipeline. It has a capacity of 61 BCM and is planned to be in service by the end of 2019.  China could also import more natural gas from Central Asia but this would require constructing a new line D of the Central Asia Gas Pipeline from Turkmenistan to China AND a new West to East Pipeline from Western to Eastern and/or Southern China.  RBAC’s forecast shows an increase in pipeline imports from about 45 to 120 BCM between 2018 and 2040.

Even though the increase in local production and in pipeline imports is substantial, it is not enough to meet planned demand for natural gas. The third option is liquefied natural gas (LNG) from countries around the world. 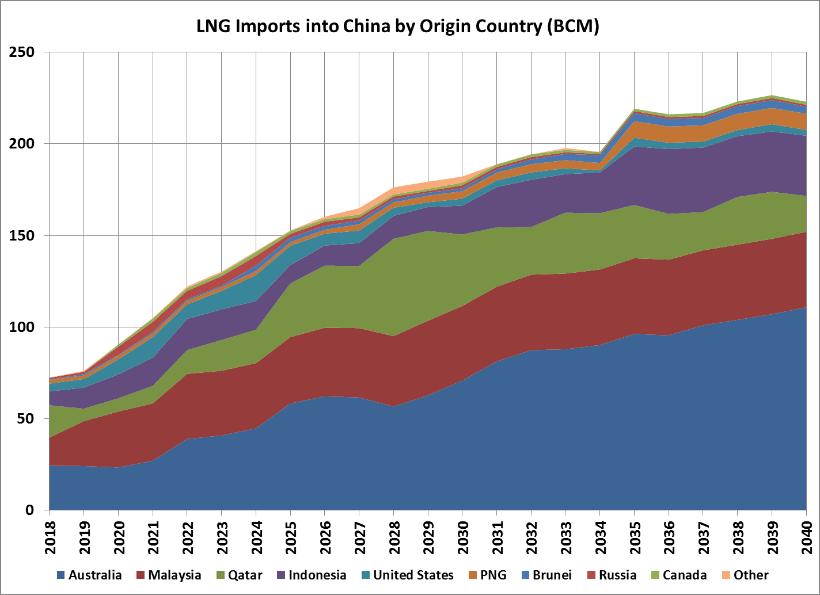 RBAC expects demand for LNG to increase from about 65 to more than 200 BCM by 2040. Most of this LNG will be sourced from just four countries:  Australia, Malaysia, Qatar, and Indonesia.  To be able to receive this LNG, China must build many more import terminals.  And it has been doing so.  Over the past few years 15 new import terminals have been constructed but another 30 are either under construction or have been proposed.  But why are we not seeing a lot of American LNG in this forecast?

Even though LNG trade sourced from the US is expected to increase quickly to make it the world’s third largest exporter behind Qatar and Australia, economic considerations give Australia, Southeast Asia, and Qatar a better opportunity to provide LNG to the Chinese market. Because the Panama Canal has been expanded to handle larger bulk commodity tanker carrying products such as LPG and LNG, the US is able to deliver these products to Asia economically.  However, geographical considerations, i.e. distance, make the most economical markets for these products to be Japan and Korea.  Economically, it is better to send American LNG to Japan and Korea while delivering Australian and Southeast Asian LNG to China.

There are other considerations, however, including geo-politics, supply diversification, security of supply, etc. Many LNG producing countries have contracts which will be expiring over the next 10 years.  In several cases, the volume of contract expiration is a significant percentage of their total production capacity.  These countries will be under pressure to renew or to negotiate new contracts to keep their LNG plants operating.

The figure below shows the volume of expirations scheduled (in millions of tons per annum) versus the percent of total capacity for each country. Eight countries will need to negotiate contracts for more than 50% of their capacity over the next 10 years.  This gives China a big opportunity to secure favorable contracts, even if these countries are not those closest to China geographically.

In addition to contracting with existing LNG providers, China has an opportunity to invest in or negotiate contracts with new LNG export projects which are either under construction or under development. This is an opportunity to provide China with even more supply security and diversification for its fast-growing natural gas needs.  Most of these projects are in North America, East Africa, and Australia.  However, both Gazprom and Novatek have announced plans for new LNG projects which could deliver more Russian natural gas to the global gas market. 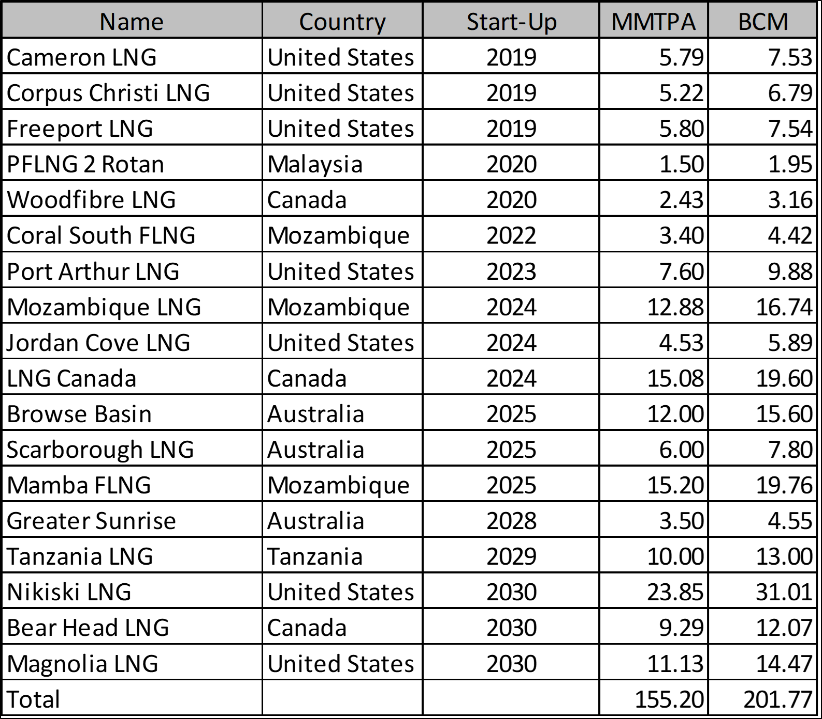 In summary, China has a great challenge in moving to the next stage of its energy development evolution, from fast-growth to sustainable, low-carbon growth. But it also has great opportunity due to the advancement of technology in the upstream oil and gas and midstream pipeline and LNG production sectors.

How can it take advantage of the expected doubling of LNG capacity over the next 22 years?

Are its demand estimates for natural gas sufficient to achieve its goals for blue skies and a sustainable energy future?

What tools and methods are needed to analyze future scenarios for global gas and LNG so that better assessment of the competition from other countries can be done?

What needs to be done to achieve mutually satisfactory trade relationships with the US and others and to meet its obligations regarding greenhouse gas emissions?

Which countries and projects should it negotiate with for new LNG supplies to secure an economical and diverse supply portfolio?

By considering carefully each of these factors, China can develop a strategy for success in achieving its laudable economic and environmental goals through enlightened acquisition and use of natural gas.

RBAC has been the leader in building the fundamental analysis tools used by the energy industry and related government agencies for over two decades. The GPCM® Natural Gas Market Forecasting System™ is the most widely used tool of its kind in its markets.  RBAC other products include the G2M2® Global Gas Market Modeling System™, Gas4Power®, GPCM Peak Daily Demand Analyzer™, GPCM Viewpoints® on Natural Gas and NGL-NA® Model.