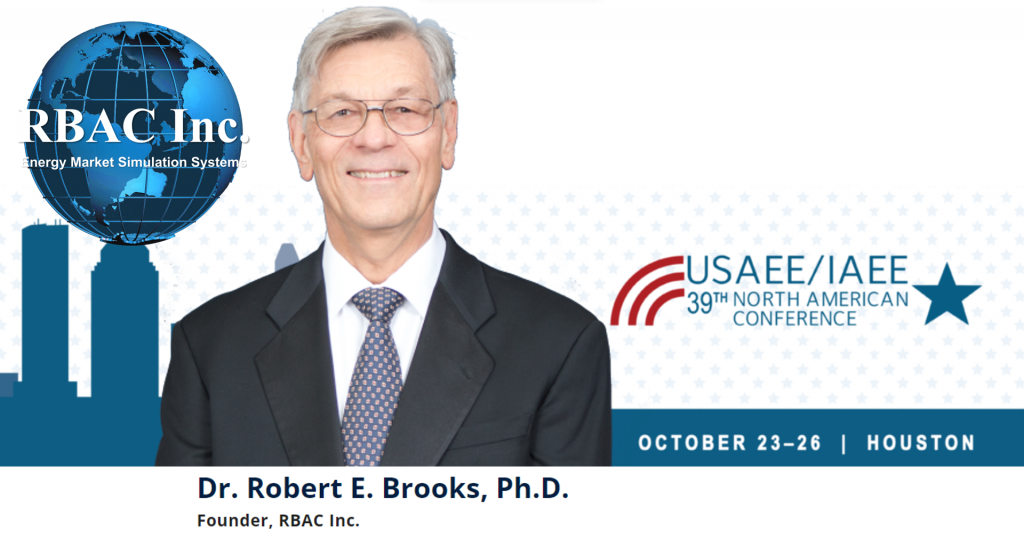 Dr. Robert Brooks, PhD, founder of RBAC Inc, will be speaking at the USAEE/IAEE joint 39th North American Conference being held October 23rd – 26th in Houston, Texas. He is presenting the topic A European Future Without Russian Natural Gas:  What Will Happen to The Global Gas and LNG Market?

The triple threat of energy insecurity, economic pressures, and continued funding of Putin’s war machine (namely, global purchases of Russia’s resources) and the unrelenting demand for energy are placing existential pressures on the European economy and the wellbeing of its citizens. Solutions must be found in the fundamental data and simulations not in narratives with unviable outcomes.

When Russia mobilized nearly 100,000 troops to the Ukrainian border for “exercises” with Belarus, gas traders in Europe and elsewhere began to get nervous due to low gas storage volumes after a hard European winter. Combined with the presence of the Russian troops near Ukraine, this nervousness began increasing gas prices at the TTF trading point in Northwest Europe higher. Russia decided not increase supply, choosing instead to send only the minimum volume required by its various contracts with European buyers and transit partners. This strategy, reportedly aimed at getting quick approval of the newly completed Nord Stream 2 pipeline, was unsuccessful.

Russian expectations to steamroll Ukraine, quickly turned into a quagmire. Such actions provoked most of Europe to adopt punitive economic sanctions against Russia including efforts to wean themselves off of Russian energy supplies, including natural gas, for good.

But is this possible? Russia was supplying about 40% of the gas that Europeans have been consuming over the past several years. Where could it get the gas to make up for the loss of this supply source?

“Given the market turmoil of the past year, it is time to update RBAC’s 2016 presentation at the IAEE Conference in Baku [read “The Evolving Dynamics of Eurasian Supply and Demand”] to 2022 realities,” Dr. Brooks stated.

“At that time, I presented results from a study examining alternative remedies Europe might adopt were Russia and Ukraine not able to reach a new deal when the Ukraine gas transit agreement expired at the end of 2019 [read “Putin Knew”]. This update is what we will present to the 39th USAEE Conference on October 23-26, 2022, in Houston, Texas.

“The world is looking for answers regarding global and regional natural gas supply, demand, pipelines, storage, as well as LNG exports, imports, and shipments. How do you make credible analyses with so many factors involved? We are looking forward to seeing you in Houston or talking to you before then.” – Dr. Robert Brooks, PhD.

Dr. Robert Brooks. PhD, is the Founder of RBAC Inc. He is an applied mathematician, energy economist, and software systems designer with over thirty-five years of experience in developing decision support systems for business and government. For RBAC, Dr. Brooks developed the GPCM® Market Simulator for North American Gas and LNG™, the first pipeline-specific monthly, long-term model of the entire North American natural gas transportation and storage system. Beginning in 2015 Dr. Brooks successfully extended these concepts to global natural gas and LNG in RBAC’s G2M2® Market Simulator for Global Gas and LNG™.