On Climate and Energy, The British Do Have Something to Smile About 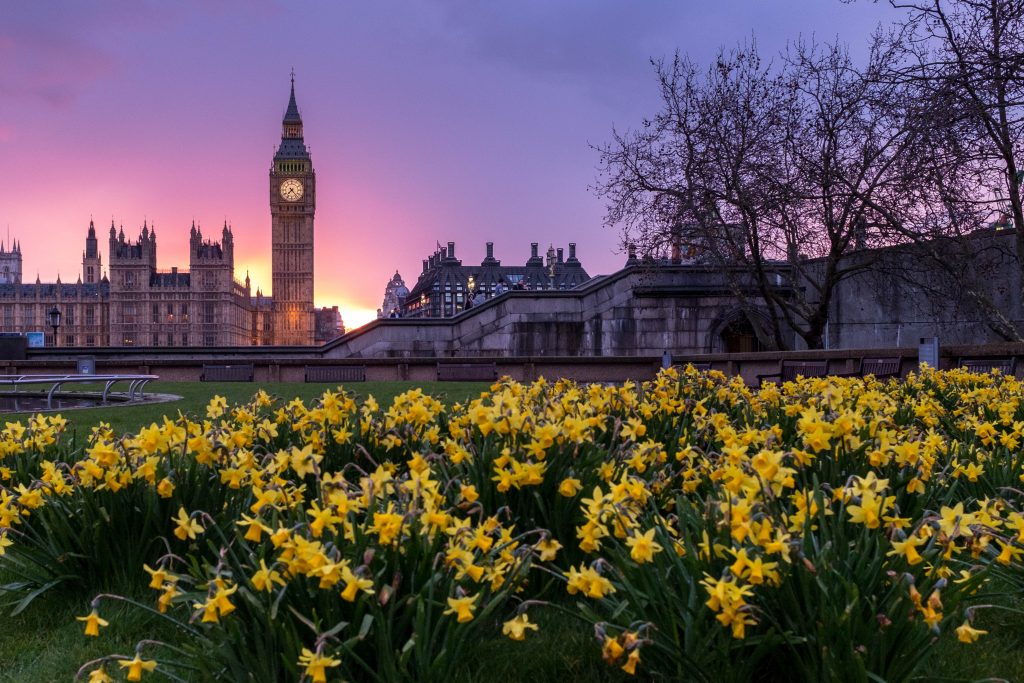 The UK has continued to reduce its carbon emissions both total and per capita since 1971. Continuously. Even with an increasing population with higher tech requirements. That’s awesome. 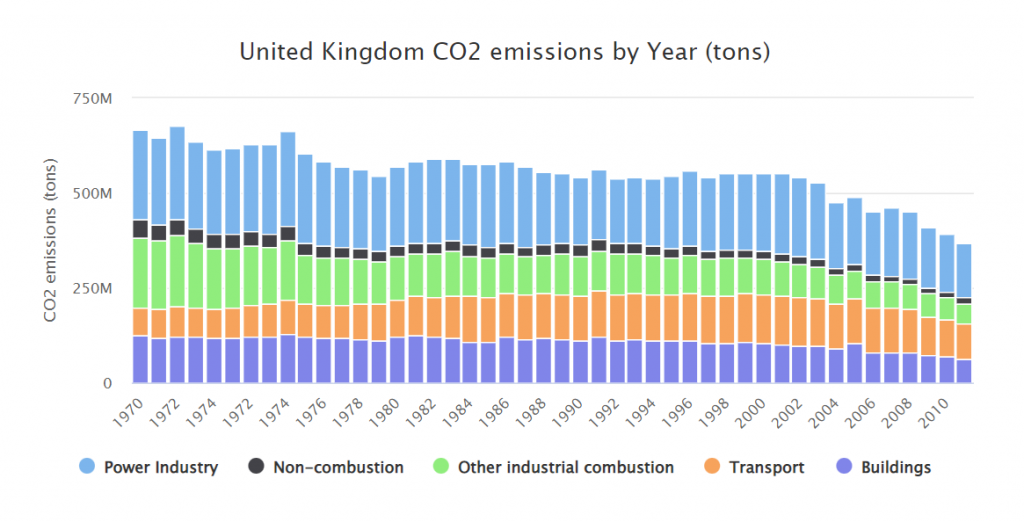 Compare with China who has only increased its carbon emissions, both total and per capita, every year. 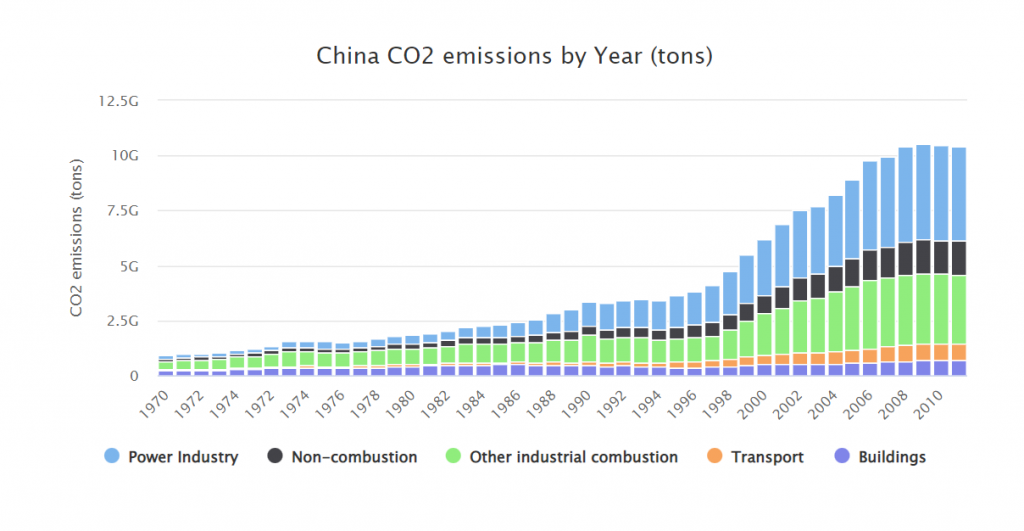 It goes without saying that in some ways this is understandable. China has gone through a modern industrialization in cooperation with the West, bringing the majority of its people out of poverty. The life expectancy in China in 1971 was 59 years old. (In UK was 72)

But it was about 11 years ago they crossed, like passing ships, at about 7 tons per capita. UK has gained much in percent reductions of emissions and has continued to do so per Carbon Brief and government estimates.

This good news seems to evade the notice of mainstream media in their quest for shocking, sensational headlines where climate is the cause for everything, from depression to extreme weather. 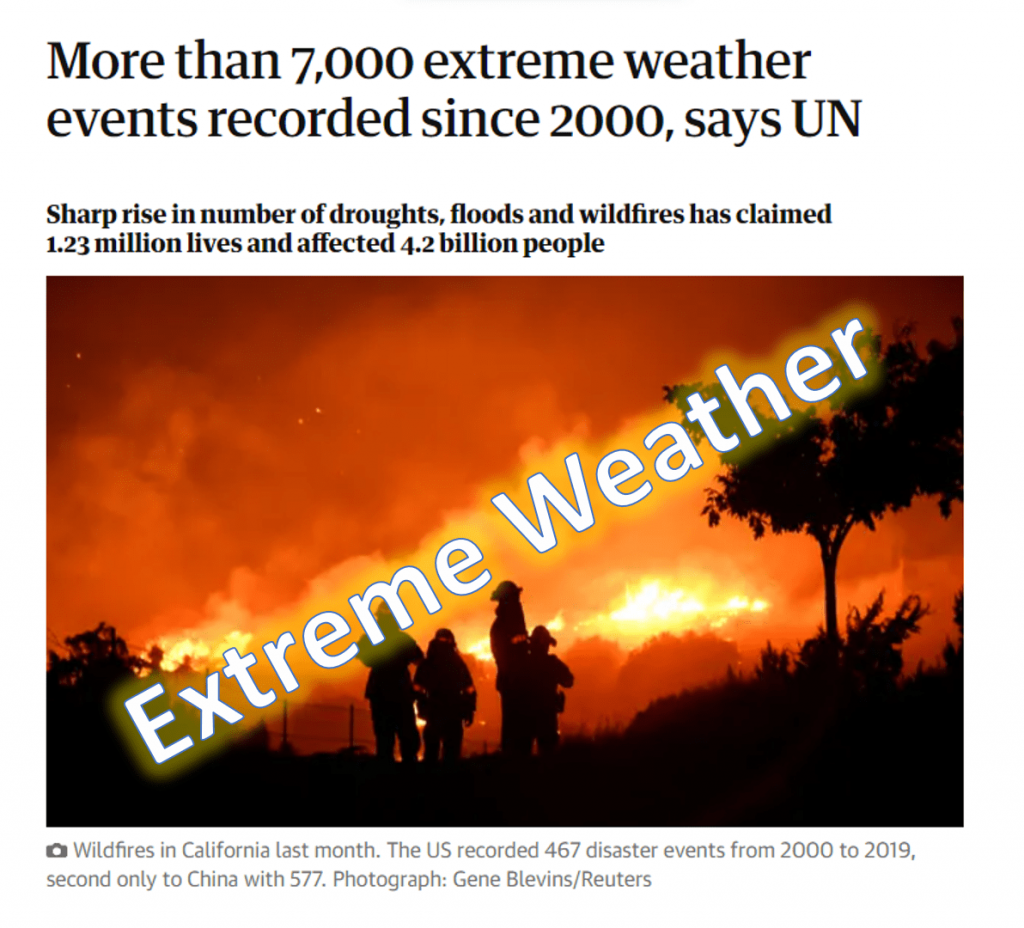 And climate news can be incredibly distressing. As people living ordinary lives try to do what they can to both live a decent standard of living and safeguard the environment, they are faced with “mass extinction,” and “act now or it’s too late,” and one famous politician said we only have 12 years left. Does such talk help the situation? One reference I found showed it not only did not inspire climate action, but also increased anxiety and depression. Interestingly it was from 2013 around the same year that Greta Thunberg learned about climate change which she said drove her into depression and later to stop talking and eating.

But as one climate researcher pointed out, a lot of the doom misses the point that human beings will do something about the changes that are occurring. If the global temperature rises in 100 years, that is definitely far enough off to prepare for changes that may happen.

Also new words are being bandied about, such as “climate justice” and the disproportionate effect of climate change on poorer populations.

And this is a very important point, poor communities and nations have much less ability to mitigate and recover from natural disasters or other cataclysms. And most of this is simply a matter of economics. The recent hurricane in Florida was a terrible disaster, yet the state had 40,000 linemen (power/telephone repairmen) ready to restore power to help those who could, get back to normal life. Compare that to Puerto Rico, where the weeks after hurricane Fiona hit, power had yet to be restored. Puerto Rico median income is about 1/2 the US average yet its cost of living is 13% higher.

Clearly dealing with climate today, let alone 100 years from now, requires improving economies, which will have the resilience and infrastructure to better withstand disaster.

Let’s get back to the UK. How about its economy? Well, when’s the last time the media told you “It’s a beautiful day, go and enjoy it!” Not likely. Well, back in 2020, the world economy was depressed, governments did lock things down and in 2021 we were in recovery. But looking longer term, there is still solid growth. Warren Buffet would invest in such a company. 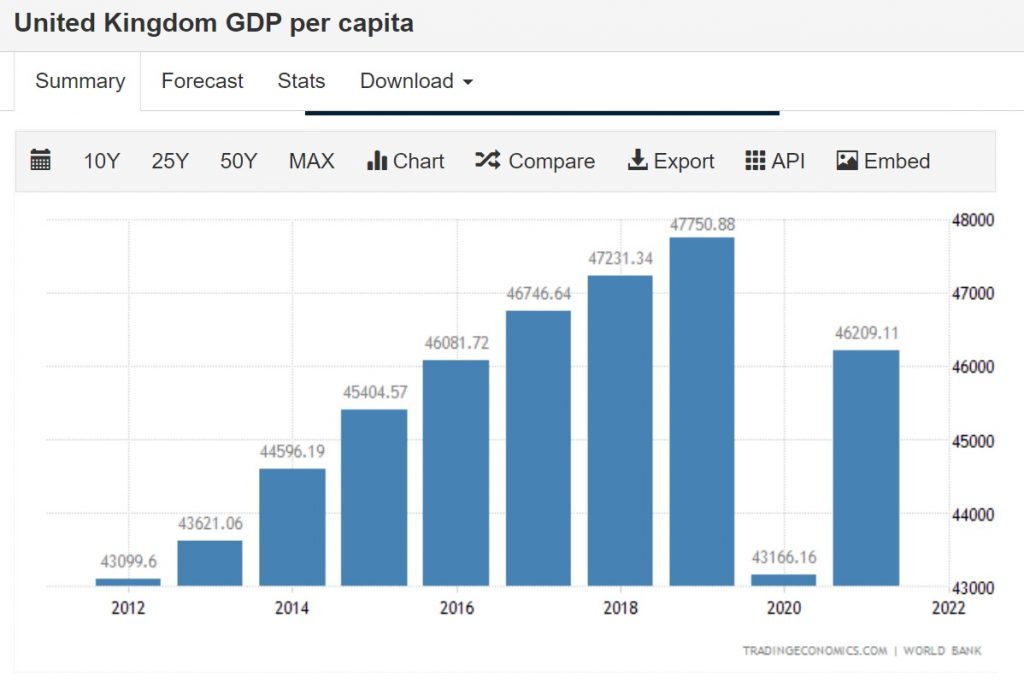 How about China? Well, as mentioned above, China has continued to increase its per capita emissions every year. As a contrast, the US has reduced emissions since 2005, mostly due to coal-to-gas switching. Gas is cleaner than coal. Why does China keep building coal plants? Actually, that question was answered in 2019 (and earlier), that when the economy slowed down, reducing coal for climate change, took a backburner. (If you want to dig into China and coal, a couple good articles (not just references) I’d recommend are for 2021 here and 2022 here.) Way back in 2008, it was predicted that China’s emissions may overshadow the rest of the world’s by 2030. And it may. 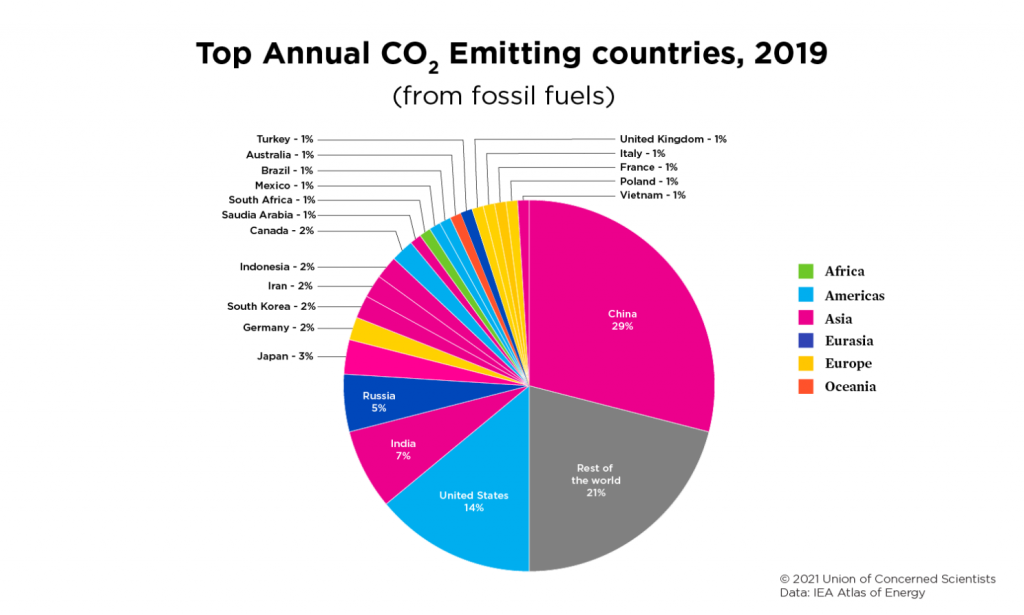 But was it right? Was it right to focus on improving its economy versus reducing emissions? China’s Vice-Environment Minister essentially said the reason for the shift back to coal was “developing the economy, improving the people’s livelihoods, eliminating poverty.”

And a quote from the Yale article above: “… as identified in its latest Five-Year Plan, one of the top risks to China’s aim of maintaining a ‘moderately prosperous society’ remains a lack of energy to drive its economy.”

But China does not use only coal. China uses many sources to drive its economy. 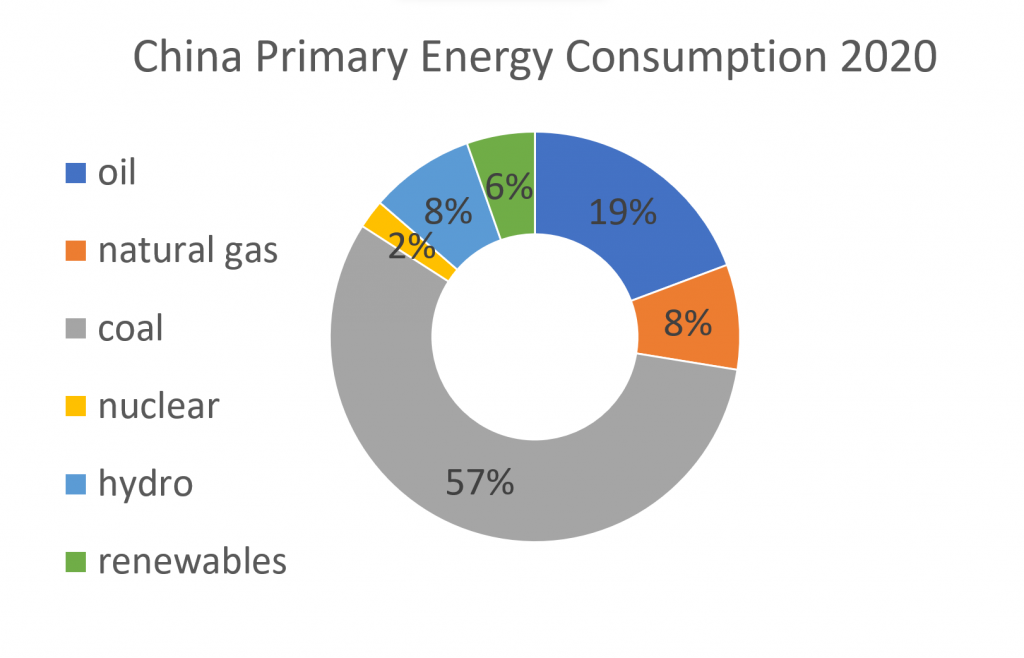 Though coal is clearly its primary energy source, China has been clear in its intention to diversify and ensure energy security. They have signed 21 LNG (Liquified Natural Gas) contracts since 2021 with half of them 20+ years! They are definitely thinking long term.

How about the UK? Overall, their energy mix is quite different to China, but it remains that nuclear and fossil fuels make up about 85% of both. Why? Because they are energy dense, very portable, and have been until the recent crisis, very affordable. 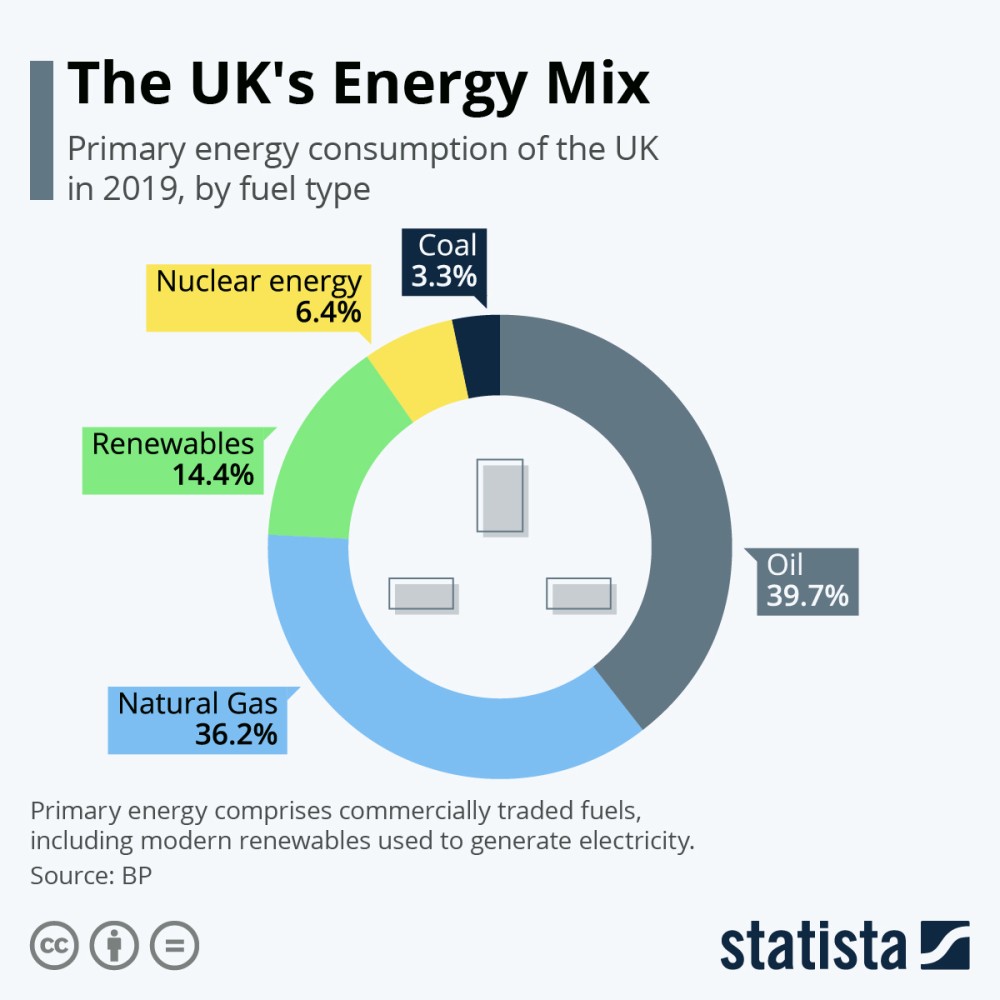 And that brings up a point. Why did UK’s Prime Minister cancel the moratorium on “fracking” for shale gas in the UK? She said, “It is vital for us to take steps to increase our domestic energy supply.” And with that, lifted the fracking ban and even announced a “launch” of nuclear energy for the UK. You can see some of the gas reserves below which I talked about in a previous post here 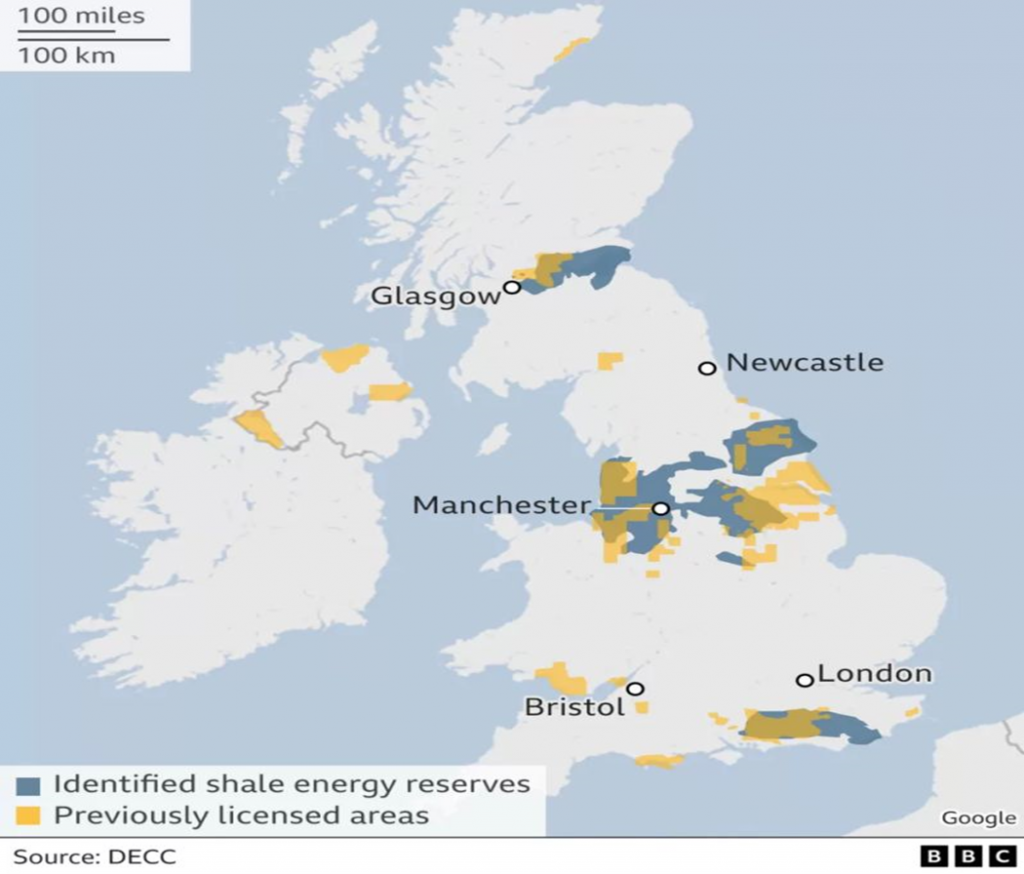 Why fracking? And could it be good news for the UK? Well, the answer to the latter is yes, potentially. Certainly, for the U.S., hydraulic fracturing (aka “fracking”) led to the shale revolution and the US becoming the number one oil and gas producer in the world. How about natural gas prices? EQT’s CEO, Toby Rice, said “Energy prices are unnecessarily high across the board, and we have a tremendous potential to lower prices by increasing supply.” So, when PM Liz Truss says it is vital to increase domestic supply, that’s the reason. America, China and yes, the UK, all are looking for one thing: abundant and affordable energy to power their economy.

But isn’t it going backwards? How about climate change? Did the UK Climate Minister really say that fracking is good for the environment?

And this is where it gets interesting. Natural gas is a pretty clean fuel. Compared to coal, it has much less emissions. If the UK were to increase its domestic production, it would need far less imports of energy and even less coal. When the US did this, it had a continual lessening of emissions, as shown here: 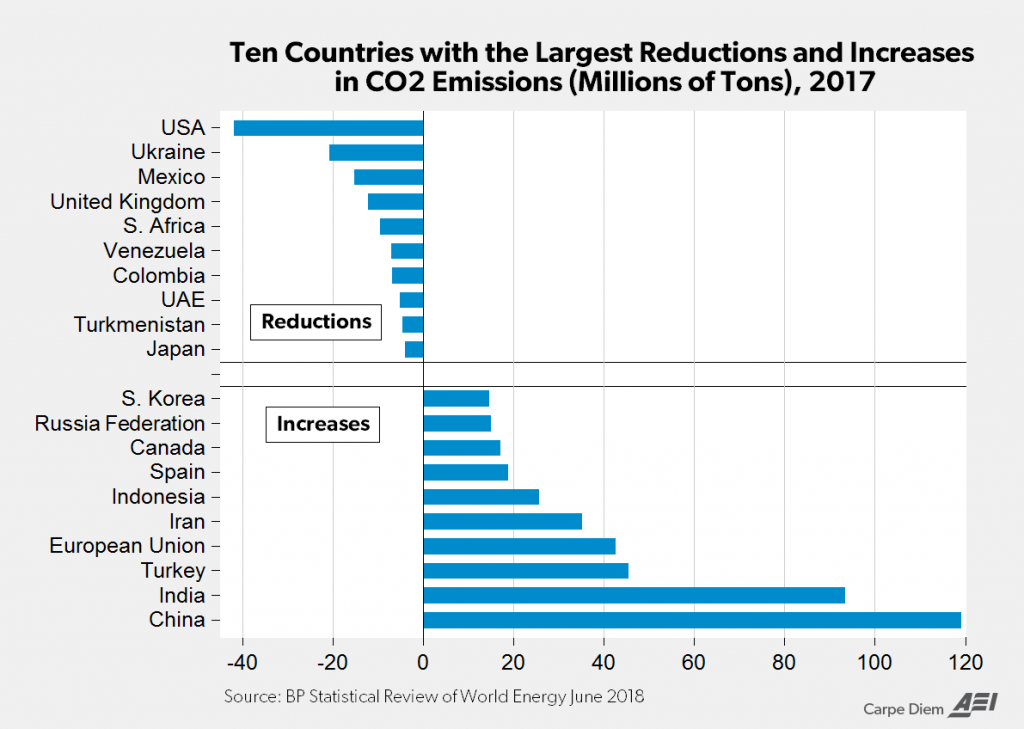 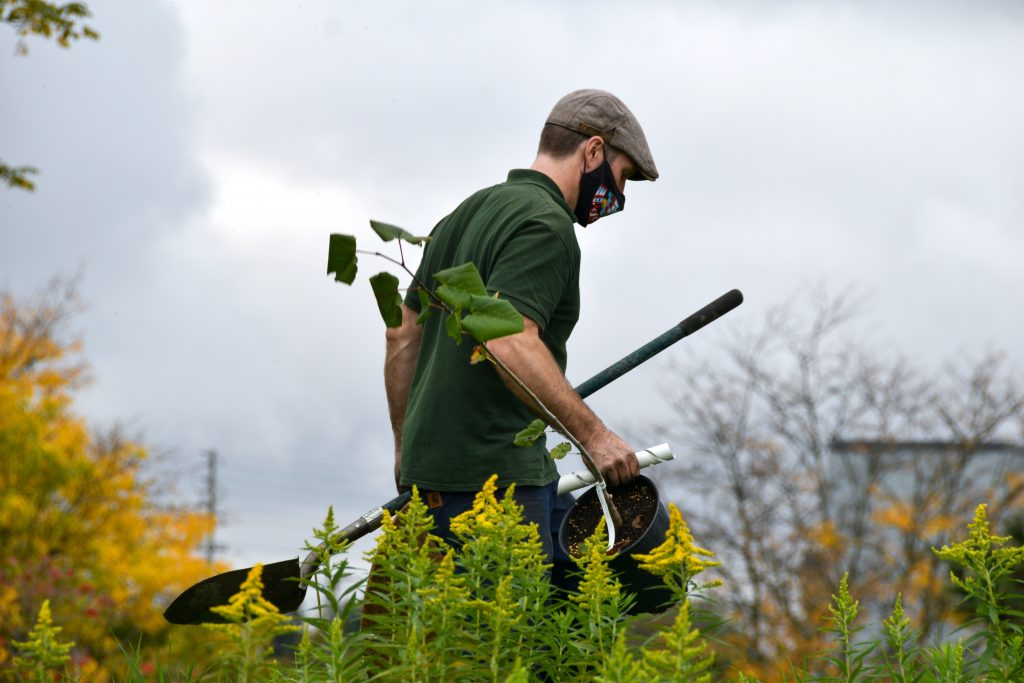 With turmoil surrounding the Russia-Ukraine war and all the adverse recoil from sanctions against Russia, it’s easy to see that disrupting energy and making it scarce causes huge economic and social disruption globally. Therefore, and as China has done, as America has done, each country must prioritize their own energy security and economy through good energy policy.

When company executives, regulators, policy makers, politicians and even environmentalists are looking toward emission reductions and reducing the impact of climate change, correct decisions about energy are vital.

Executives want to invest in projects which are profitable, regulators want projects which are in the public interest (e.g. accessible and affordable), policy makers want a plan which won’t break (energy security), politicians (ideally) want energy which will reach the most people affordably and drive the economy, and environmentalists (and all people actually) want energy which will be the least harmful to the environment.

None of these sound like bad things. But there are a lot of stakeholders here and to balance all the interests, you definitely have to make sound decisions.

And as gone over before, economics plays a vital role here. Without sound economics, projects will not be profitable and/or won’t make energy accessible and affordable and won’t drive the economy which would otherwise increase the economics of a society to further support the economics of research and development of better energy, better environmental safeguarding, etc.

And to do this, one must have experts in economics and the markets. It’s one thing to have an ideological approach to energy and favor building up one energy source over another. But how will that affect things such as prices, supply, demand, flows, etc.? This is where market simulation comes in.

As written in Dr. Robert Brooks’ great article on Simulation and Optimization:

“By combining simulation methods which allow analysts to model a variety of scenarios, including both likely and unlikely events, with state-of-the-art optimization technology, we believe that they will be able to develop more robust strategies for investment in an uncertain world.”

And so RBAC has done an analysis and as presented to America’s Natural Gas conference, European gas prices went up into ranges not seen, and the analysis showed they would go down. Did they? We’re still in crisis, aren’t we?

Despite the narrative, market simulation showed gas prices would decline, and that’s exactly what happened. They have been in decline since late August.

Without this you are not likely to make good decisions that make energy affordable, accessible, are economically feasible and benefit the environment.

RBAC was created with a mission to help:

“The mission of RBAC is to contribute to the prosperity of mankind through improvements in the quality and ethics of economic decisions made by the energy industry. This, in turn, will increase the availability of affordable energy throughout the world, while still allowing for profitability of those projects to deliver shareholder value to the investors as well as the interests of other stakeholders.”

Whether calm or turbulent times; whether Europe, Asia, Africa or the Americas; whether developed or developing, with the right market simulation tools the energy crisis would be less a crisis than a danger, less a danger than an emergency, less an emergency than a contingency, and finally, simply part of your energy planning.

The current energy crisis unveiled the unintended consequences of not having a robust enough understanding of the impacts and ramifications of energy policy and decisions on gas market prices, supply, demand and flows. From Russian sanctions to oil and gas exploration and infrastructure, to renewables, decisions have been made, without such market simulation and robust analysis which led to lower supply, increased prices, reduced energy security and forced many countries to increase their coal-fired generation to keep their lights on and economies going.

So finally, we can see that misguided and even well-intentioned energy policy can finally lead to less energy security, high energy prices, turning to less clean alternatives and thus less progress on climate and environment-related goals.

For the energy industry and policy makers, and environmentalists, you can also see that making energy more affordable and accessible has a long-term advantage for both people and the environment and achieving this result can be facilitated through energy market simulation.

And that would be a win.

Home » On Climate and Energy, The British Do Have Something to Smile About