Impacts of the Pandemic

RBAC’s recent “Natural Gas Immunity to COVID-19?” article highlighted that the pandemic’s impact to energy consumption was more acute in the oil markets than in the natural gas markets because of the different end uses of the commodities. A large percentage of refined crude products are used as transportation fuels, which experienced the largest demand decreases of any end use sector. This dynamic has important implications for associated natural gas production. The article concluded that non-associated gas producing areas may benefit by serving the void left by declines in associated gas production from areas such as the Permian, Bakken, and Niobrara. 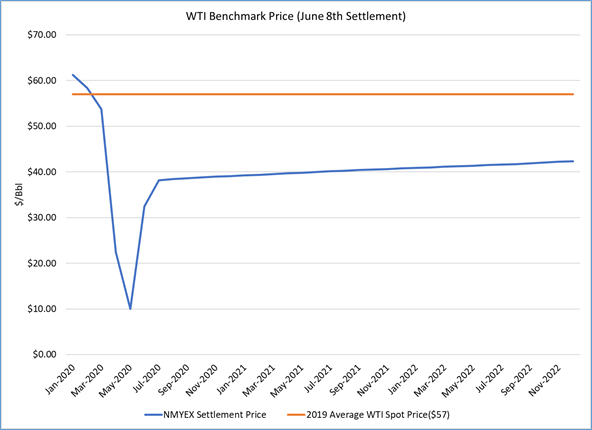 There has been a significant rebound in crude oil prices since the publication of that article, which can be attributed to a reduction in supply and a modest recovery in demand. As of June 8th, prompt month settlement prices are just below $40/Bbl, and the forward curve is holding steady at approximately $40/Bbl through the end of 2022. At these prices, not very many oil-focused locations in North America are profitable enough to warrant drilling new wells, but a $10 increase in the oil price to $50/Bbl would likely be attractive enough for upstream companies to drill in the Permian, while a price of $55 and $60 could attract investment in the Bakken and Eagle Ford respectively. Even slight changes in supply or demand could result in those price levels.

What Are the Implications of a Crude Rebound to Natural Gas?

The largest source of uncertainty in the prior analysis and this one is the degree and timing to which global transportation will resume at pre-pandemic levels. The “Natural Gas Immunity to COVID-19?” scenario assumed that there may be a period of persistently low demand for transportation fuels. What are the implications if the opposite is assumed? WTI settlements have already rallied to nearly $40/Bbl – a drastically different value than the -$40/Bbl settlement for May delivery that dominated headlines last month. What would happen to natural gas markets if oil-focused producing areas recovered more rapidly than in RBAC’s 20Q1base forecast?

The GPCM® Natural Gas Market Forecasting System™ offers a proven, state-of-the-art analytical approach to understand the complexities in natural gas markets. To simulate a quicker recovery, RBAC’s “Oil Rebound” GPCM scenario assumes a 10% increase in production, relative to the 20Q1base forecast, beginning in June 2020 in the Permian, Bakken, and Niobrara. The total impact to production was a 750 million cubic feet per day (MMcf/d) increase on average through 2022.

Henry Hub prices in the Oil Rebound scenario are $0.17/MMBtu lower on average than in 20Q1base, but the shift of gas production to areas with large volumes of associated gas production has a major impact on pipeline constraints.

The price impact at Waha reveals that the Permian area gas production forecast in the Oil Rebound scenario is close to the basin’s pipeline takeaway capacity, even when assuming Permian Highway enters service in April 2021 (Permian Global Access is assumed to enter service during 2023). The 20Q1base Permian basin production forecast averages 12.9 Bcf/d in 2022 while the Oil Rebound scenario averages 13.8 Bcf/d, a difference of 0.9 Bcf/d.

There is a “sweet spot” for production volumes that lies between 12.9 and 13.8 Bcf/d. At 13.8 Bcf/d in 2022 in the Oil Rebound scenario, Waha prices are forecast to sharply decline as the basin’s takeaway capacity is reached and producers are forced to sell associated gas – a byproduct of oil production – at low prices, like what was experienced during 2019. In contrast, the Permian basin production forecast in 2022 of 12.9 Bcf/d in the 20Q1base scenario shows no such decline, an indication that there would be enough takeaway capacity at that level of production.

Implications of a Crude Rebound

This dynamic has important implications for constraints in the North American pipeline network and basis prices, highlighted by the example of a “sweet spot” of production rates in the Permian basin that would maximize infrastructure utilization without sharply decreasing Waha prices. GPCM is a well-established, proven system that can be utilized to quickly evaluate a range of supply/demand possibilities to better understand and quantify risk during uncertain times. Using this tool, RBAC has identified a possible oil price future which would likely produce a gas-price boomerang at the Waha hub. Such analyses are crucial for producers as well as traders whose business involves Waha and other important pricing points in North America.