Hindsight is 20/20: What Happened to the Northeast When Pipelines Couldn’t Be Built?

The New England natural gas market has been subjected to winter price spikes for over a decade, and this trend appears likely to persist. Throughout most of the year, there is adequate natural gas pipeline capacity to serve regional gas demand. However, pipeline capacity is insufficient to meet peak gas demand during the coldest winter weeks which leads to price spikes. Since natural gas-fired generation comprises a significant portion of the New England Independent System Operator’s (ISO-NE) generating capacity, this pricing dynamic also has significant impacts on ISO-NE energy prices, fuel mix, and reliability.

Neither project was ultimately constructed. At the time of pre-filing with the Federal Energy Regulatory Commission (FERC), both projects had a proposed in-service date of November 2018. Given the region’s susceptibility to gas price spikes during peak demand periods, it is reasonable to ask the following question. If either of the projects had been completed, what would have been the impacts on New England’s energy markets?

New natural gas pipeline projects are often reliant on long-term contracts from their shippers in order to receive both approval from FERC and to secure project financing. The NED and Access Northeast projects were highly contingent on long-term contracts with utilities. This dependency was highlighted in the August 2016 case of the Conservation Law Foundation v. the Department of Public Utilities presented before the Massachusetts Supreme Judicial court. The court ruled that electric utilities could not pass the cost of pipeline tariffs on to their customers,1 and subsequently, the pipeline developers for NED and Access Northeast withdrew their applications. There has, however, been continued discussion among pipeline developers to re-examine the Access Northeast project.2

Algonquin Gas Transmission is one of the most important natural gas pipelines in New England and serves customers from the New Jersey-Pennsylvania border through Boston, MA. The proposed Access Northeast Project consisted of upgrades to the existing Algonquin pipeline system and to construct a liquefied natural gas (LNG) storage facility in New England. The combined upgrades would be capable of delivering up to 925 million cubic feet per day (MMcf/d) of natural gas during peak periods.3 The LNG facility was intended to operate as a peaking system – the pipeline component of the project would deliver feed-gas to the LNG facility for liquefaction during off-peak demand periods and the LNG facility would then deliver vaporized natural gas during peak periods. Used in this manner, the facility would reduce the required pipeline capacity from approximately 925 MMcfd to 450 MMcfd.

Tennessee Gas Pipeline is an 11,750-mile pipeline that spans from south Texas to Boston. Zones 4, 5, and 6 of the pipeline are used to transport natural gas from the Marcellus and Utica shale formations in the Appalachian basin to customers in the northeastern U.S. The NED project was comprised of a “Market Path Component” with 1.3 billion cubic feet per day (Bcf/d) of natural gas transportation capacity and a “Supply Path Component” with 1.2 Bcf/d of capacity. At the time of NED Project application with FERC, the company had secured long-term contracts totaling just over 500 MMcf/d of capacity.4

If either of the projects had been completed, what would have been the impacts on New England’s energy markets? Three distinct scenarios were created using RBAC’s GPCM® Natural Gas Market Forecasting System™ to answer this question: 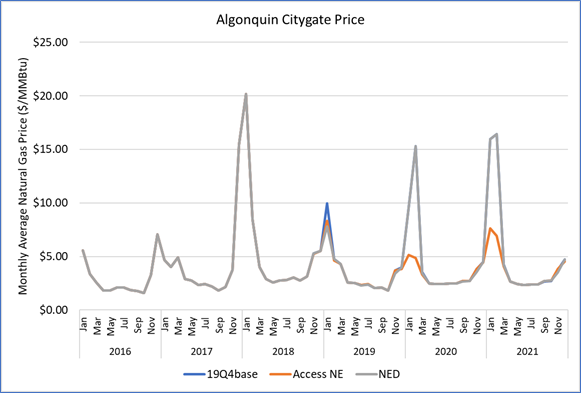 The NED project’s price impact would have primarily been experienced at Tennessee Gas Pipeline Zone 6, delivered (TGP Z6), which is another major New England natural gas pricing point. The simulated peak month impacts are most prominent during the month of January. During January 2019 prices would have been reduced by $3.36/MMBtu; 2020 prices reduced by $2.29/MMBtu; and forecasted 2021 prices by $2.68/MMBtu. The 2019-2021 simulation produced January prices that were on average $2.78/MMBtu lower during the month of January with the NED Project than without. 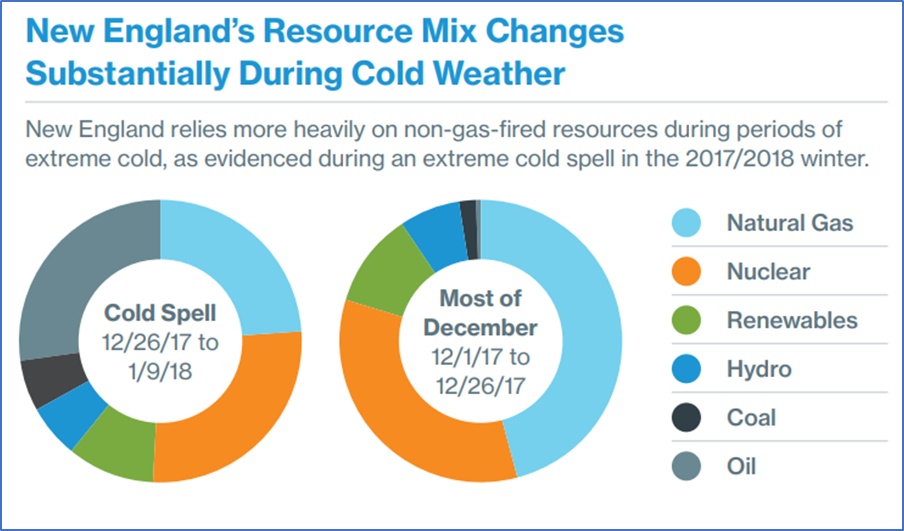 According to the Independent Market Monitor of ISO-NE, the total wholesale cost of electricity in 2018 was $12.1 billion.5 At $6 billion, energy costs accounted for half of the 2018 cost of delivering electricity. Since natural-gas fired generators are frequently the marginal units, they tend to set the market price of electricity thus making energy costs in ISO-NE highly dependent on the price of natural gas. The average monthly natural gas price measured at Algonquin Citygate and the average monthly day-ahead locational marginal price (LMP) of electricity for the Boston area have a correlation of 99%. Real-time LMPs, both peak and off-peak, also share high correlation with the wholesale gas price, but over 97% of the cost of energy was settled on day-ahead prices in 2018. 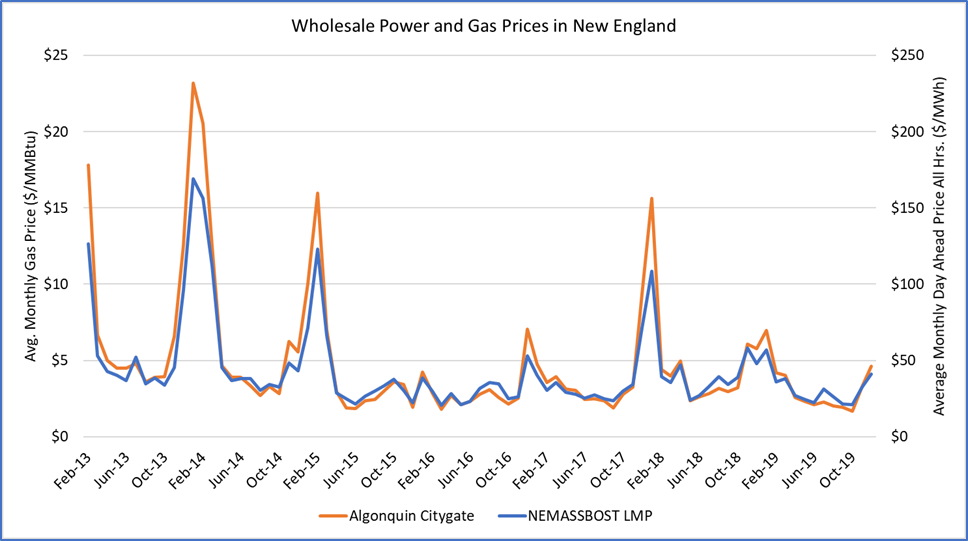 For the purposes of a rough estimate, assume that natural gas prices will set the price of the electricity since prices would be significantly lower with the Access Northeast Project. Price reductions at Algonquin Citygate would likely have the greatest impact on ISO-NE energy prices since over half of gas-fired generation capacity in the ISO is connected to the Algonquin pipeline. The Access Northeast GPCM scenario shows that the project would reduce January and February prices by an average of $5.75/MMBtu during the time period 2019-2021. With gas-fired generation setting the wholesale price of electricity, this would translate to wholesale electricity price savings of approximately $57.50/MW-hr. during the months of January and February — $5.75/MMBtu * 10 MMBtu/MW-hr. — in addition to the emissions avoided by substituting natural gas for fuel oil during peak winter generation periods.

The total energy savings for consumers from such a price reduction could be very large. During the months of January and February from 2018-2020, the New England states consumed approximately 98.3 Bcf of natural gas per month. A price reduction of $5.75/MMBtu applied to that volume of gas would equate to approximately $565 million dollars. Similarly, ISO-NE’s Net Energy for Load averaged 10,409 GW-hr. for the same months. A price reduction of $57.50/MW-hr. would equate to over $598 million dollars. The peaking nature of this problem complicates the analysis, but this approximation suggests that New England customers would save $1.1 billion for every monthly gas and power price spike avoided by Access Northeast — not bad for a project with an estimated total cost of approximately $3 billion. While this number might seem surprisingly large, other analyses performed five years ago predicted similar cost savings.6

Using the GPCM system users are able to simulate future market outcomes based on their own set of assumptions, but can also “back-test” market responses to forgone infrastructure projects, environmental and policy regulations enacted, and other potential market impacting events. The above analysis focused on the market impacts of forgone infrastructure and clearly shows that the opportunity costs can be quite dramatic, not just for heating demand loads (primarily residential and commercial demand) but also gas-fired power generation demand and thus electricity prices.

Quantifying the full-cycle (environmental, economic and social welfare) cost/benefit analyses is imperative to optimizing local, state, regional, and overall national socioeconomic benefits. As you can see from this article, hindsight is 20/20. This demonstrates the vital necessity to have the ability to run multiple scenarios, using the GPCM Natural Gas Market Forecasting System, to better understand the potential risks and opportunities around any project for any Resource Planning process.